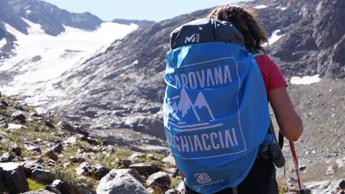 The Legambiente “Caravan of Glaciers 2022” campaign is underway

Glaciers fragile and increasingly at risk as a result of the climate crisis. Drought, unprecedented heat waves, record temperatures and no snow: all faces of the same unstoppable emergency that threatens the health of our alpine arc. Indeed, due to global warming, Alpine glaciers are shrinking at an unimaginable rate. More than 200 have already disappeared from the late nineteenth century, giving way to debris and rocks.


On the Alpsin fact, the temperatures are growing at a speed d
opia compared to the global average. The atmosphere, especially above 3,500 meters of altitude, is in total disequilibrium: at the end of July, the freezing point was recorded by MeteoSwiss in the Swiss Alps at 5184 meters. An unprecedented figure. In addition to this, there are the effects of the winter 2021/2022, extremely mild and dry throughout the Italian Alps (in many areas the threshold of 100 days without rain has been exceeded). Not to mention that, in the last ten years, the snow on the ground has undergone a constant decrease, leaving more and more space for arid scrub. In spring the snowfall was close to historical lows, so much so that many snow gauges already reached zero in May. Effects destined to affect the delicate mountain ecosystems ever more deeply, with important repercussions also in the plains.

To protect our tops Legambiente launches the third edition of Caravan of the Glaciersa traveling campaign promoted as part of the ChangeClimateChange initiative, with the scientific partnership of Italian glaciological committee and with supporters such as Sammontana and FroSta and technical partner Ephoto.

It is a journey in five stages, from 17 August to 3 September, which will monitor the health of a dozen alpine glaciers, most of which are under the magnifying glass since the 2020 edition of the campaign. We will start from the glaciers of Mont Blanc del Miage and Pré de Bar (Valle D’Aosta) from 17 to 19 August, then continuing with the glaciers of Monte Rosa di Indren (Piedmont) from 20 to 22 August and again the Himalayan dei glacier Ovens (Lombardy), from 23 to 26 August; the glacier of Marmolada (Veneto-Trentino) from 27 to 31 August and finally the glacier of Montasio (Friuli-Venezia Giulia) from 1 to 3 September.

At each stage, monitoring, excursions, press conferences, moments of art and music dedicated to glaciers, to reflect on a sustainable future of our mountains and the planet, to push political decision-makers towards far-sighted choices and people towards more sober lifestyles. To be involved in the exceptional testimonial campaign such as Enrico Camanni (writer, journalist and mountaineer), Steve Della Casa (film critic and art director), Tessa Gelisio (TV presenter, blogger and entrepreneur), Martin Mayes (eclectic musician), Nives Meroi And Romano Benet (climbers) e Isabella Morlini (three times world champion in snowshoes).

“A little over a month after the Marmolada tragedy – he declares Giorgio Zampetti, national director of Legambiente – we return to draw attention to the climate emergency, now unstoppable, which compromises the state of health of our entire Alpine arc. Fires, droughts, heat waves, increasingly frequent extreme events, record temperatures: there is no more time for our mountains, which send us a loud and clear SOS. With the third edition of Carovana dei glaciers we want to return to providing data and concrete elements to ask the Italian government to push the accelerator to get to gas emissions net greenhouse effect equal to zero in 2040in line with theParis Agreement (COP 21), and to have a climate adaptation plan to protect territories and communities. Starting from the most affected areas, such as the Alps ”.