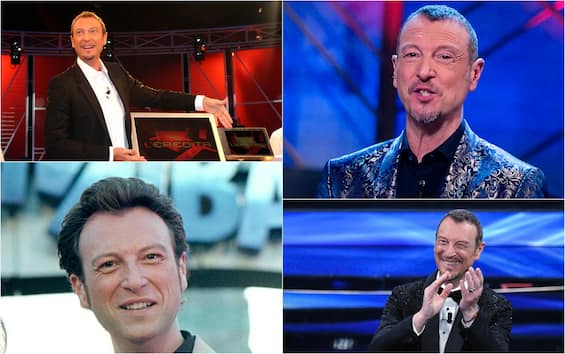 Amadeus turns 60. One of the most loved television faces in Italy, presenter of the last 3 editions of Sanremo Festival (and the next two), was born in Ravenna on 4 September 1962. From his beginnings as a DJ to his radio career, up to his passage on TV and the long climb to success. Here are the fundamental stages of his life.

The beginnings on the radio

Amadeus is the pseudonym of Amedeo Umberto Rita Sebastiani. His parents are of Sicilian origin and since the age of 7 he has lived in Verona. During his school years he began to work as a disc jockey in bars and discos. His beginnings are in the local broadcasters Radio Verona and Radio Blu. In 1986 he came into contact with Claudio Cecchetto who launched him on Radio Deejay together with other talents such as Fiorello, Jovanotti and Marco Baldini. “I started as a joke as a kid to put records as kids, then thanks to Claudio Cecchetto as a DJ, it became a profession”, said Amadeus, who will remain in the station until 1994, before moving on to Radio for two years. Capital Music Network. From 1996 to 2008 he no longer worked in radio and then returned between 2008 and 2017 on Rtl 102.5.

The transition to TV

Meanwhile, in 1988 Amadeus made his television debut in the program 1,2,3 Jovanotti (on Italy 1). He is then conductor of DeeJay Television And DeeJay Beachagain on Mediaset and in 1993 he was chosen to host the Festivalbar with Cecchetto, Fiorello and Federica Panicucci. He will also be confirmed for all editions until 1997, achieving great success. At this stage he is among the conductors of Have a nice Sunday on Canale 5 and other programs such as Dance champions And The Quizzone. In 1998 he was the host of two new shows: Freshmen And Meteors.

The first landing in Rai

In 1999 Amadeus goes to Rai: the first conduction is Class partyon Rai 2. In the autumn he moves to the flagship network to conduct Sunday In. In a short time, however, he begins to establish himself as “the gentleman of the pre-evening”. From Good luck! to Quiz Show until I gamble, becomes the fixed face of the Rai 1 prize programs before the news. In 2002 he was the creator and conductor (until 2006) of de The legacy, which is a huge success, often exceeding 8 million spectators per episode. During these years she also leads some special events, such as Miss Italy in the world, Sanremo Summer and the first edition of the reality show Music Farm.

The parenthesis at Mediaset and the return to Rai

In 2006 he returned to the networks of Biscione with a two-year contract. The new adventure starts with the presentations of Secret formula (interrupted after a few weeks due to poor ratings) e 1 against 100 (which does not achieve the company’s Auditel objectives). It doesn’t go much better with talent Sing and win, together with Checco Zalone, who after a good initial response is canceled. In the end, after months of indiscretions and negotiations, Amadeus returns to Rai in June 2009. It starts again with good ratings thanks to Midday with the family (which will lead until 2016), then also switches to the afternoon slot with Mother’s heart. In 2013 she achieved great success with her participation as a competitor in the program Such and what show by Carlo Conti. And in the summer of 2014 he returns to Rai 1 to conduct the game show Chain reaction – The winning agreementwhich has a huge following and will run until 2017. His other successes of this phase include the variety Everything is possible tonightaired on Rai 2 from 2015 to 2018, and the New Year’s program the coming yearin various editions.

The boom with the game show Soliti ignoti

On March 20, 2017 Amadeus made its debut with the Rai 1 program Usual unknown – The return. The game show has a good response, becomes a fixed appointment also in subsequent seasons and is still on the air. It will often be derived with special bets on Sundays or prime time in conjunction with the Telethon or with the draws of the Lottery Italy. In the most recent editions, the novelty of famous people as competitors has been introduced, who donate the prize money to charity. During these years she also leads the variety-talent show Now or never.

This long series of successes leads Amadeus to be chosen as conductor and artistic director of the Sanremo Festival for the 2020 edition (and previously in December 2019 of Sanremo Young). This is the edition that aired a few weeks before the outbreak of the Covid pandemic and obtained a resounding success: with an average share of 54% it is the most watched Festival since 1999. The Amadeus-Fiorello couple is also reconfirmed for 2021, edition remembered for the absence of an audience at the Ariston theater due to the restrictions due to the pandemic. The average share (46%) drops compared to the previous year but is still an excellent result. In 2022 Amadeus makes the trio and the 72nd edition gets an incredible 58% share, becoming the most followed since 1997. After this exploit he was reconfirmed already at the helm of the event for the next two years (2023 and 2024). With 5 consecutive conduction he will equal two sacred monsters like Pippo Baudo and Mike Bongiorno. Waiting, to keep in training, leads Your business – Family format and the show Arena ’60 ’70 ’80 and … ’90three evenings at the Verona Arena to celebrate four musical decades with the most famous Italian and international hits.

Amadeus was moved from 1993 to 2007 with Marisa Di Martino. At the wedding his best man was Fiorello’s lifelong friend. The couple had a daughter, Alice, born in 1997. While running the program The legacy, met the ballerina Giovanna Civitillo, who then married in a civil ceremony in 2009. The two had a son, José Alberto, also born in 2009. Only in 2019, with the cancellation of the Sacra Rota of the first marriage, Amadeus and Civitillo were also able to marry in church. The conductor is a great Inter fan, to the point that the name of his second son, José, is a tribute to the Nerazzurri coach of that period, that is, José Mourinho.