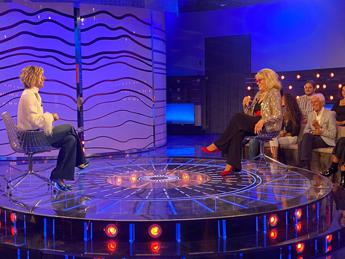 In the role of the protagonist there will be Margot Robbie, the Harley Quinn from ‘Suicide Squad’. The announcement in Francesca Fialdini’s program on Rai1

“In America they will make a film about my life, with Margot Robbie (Harley Quinn from ‘Suicide Squad’, ed) but seeing myself on a screen isn’t something I think I’d like, happiness is something else. I’m happy to be alive. “So Amanda Learguest yesterday of Francesca Fialdini in the debut episode of the fourth edition of ‘Da noi… a free wheel’ on Rai1, he announced the US project of a biopic on his story.


The model, singer, actress, painter and TV presenter told many anecdotes from her life, including that of her first and feared one hosted at the ‘Maurizio Costanzo Show’. “They told me about a certain Costanzo, who could have put me in trouble with his questions. So I brought a mandarin, hidden in my pockets and now ready to throw it at him. But then it went very well and I am still a guest of the Costanzo Show” , he said.