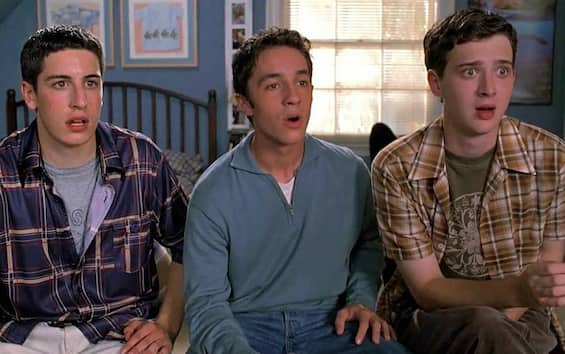 The rumors that had been circulating in Hollywood for some time are now confirmed by what “in Hollywood” is more or less the Bible, that is The Hollywood Reporter.

The famous US magazine reported that a new film in the franchise is currently in development at Universal American Pie.
THR reveals that actress Sujata Day is busy writing the screenplay for what will be a “new version” of the comic-irreverent epic.

The progenitor of the film saga, American Pie the original in short, was released in 1999, becoming a huge success at the box office.

The film grossed over $ 235 million, starting with a budget of just $ 11 million. The film came at a time when comedies of that type, which mix comedy and vulgarity, had reached their apogee, preceding films such as Superbad, Knocked Up, The Girl Next Door And The 40 Year Old Virgin.

The franchise of American Pie produced three direct sequels and five spin-offs.
Regarding the latter, Anthony Lund of the US magazine Movie Web he writes that “they have suffered from being repetitive and not original”.

In the same article (in which Lund gives news of a new chapter in the comic-vulgar saga in the pipeline) we read: “for many critics the franchise of American Pie ran its course a long time ago, and with the latest films all coming out directly in the video offerings under the ‘American Pie Presents’ banner, the last thing that was expected was a new film by American Pie”, Which makes it clear that Anthony Lund is not really a lover of the genre and an admirer of the franchise, here.

Instead, for the many fans of that trend whose path was opened by the 1999 film, the news of a new act coming will certainly be a cause for joy.

The few details available for now

There are very few details available on the project. It is known that it will come once again from Universal, produced by 1440 Entertainment.
The story that will be told will be original, however the plot has yet to be revealed: for now everything is top secret.
The intent would seem to be to take the franchisee in a new direction, which is why it is unknown if any of the original cast will return for a character or for a cameo. Some think that the list of actors will be completely new, just to emphasize the new direction that the saga intends to take.

Original film star Seann William Scott (who in American Pie played the character of Steve Stifler) some time ago he said that it would not be possible to make new chapters of the epic now.
The sequels and spin-offs haven’t changed much from the style of the pioneering film, the original. It is Scott himself in early 2022 had spoken in these terms of that style of humor: “You know, I was having a conversation with a friend the other day, and I said, ‘You could never do American Pie nowadays’. For some of the things in that movie you would get arrested and probably go to jail for a long time if you did. I think a lot of the comedies and things that have secured me a career no longer have (audiences) appeal. I mean, I could be wrong. I think some of the general comedies may be funny, but people, it seems, including myself, appreciate more witty and intelligent humor and good writing than something over the top, ”Seann William Scott said.

Certainly not prophetic words, given that – after the last feature film of 2012, which brought together the cast of the first three films – Universal has decided to return to investing in the franchise that mixes sex, comedy and adolescent problems, trying to make a case of it. equal to the cult branded 1990s-2000s.

Sujata Day will be the screenwriter

It will take care of the new adaptation of American Pie the actress specialized in comedy Sujata Day (aka Sujata Choudhury).
“I’m obsessed with dirty comedies, and American Pie is one of my favorites. I’m looking forward to working on the new film, ”said Sujata Day.
Day has worked on projects such as Insecure (in the role of actress) while she measured herself with directing with Definition Pleasea comedy-drama released in 2020.
Born in 1984, a career as an actress, director, screenwriter and also a model, Sujata Day became famous thanks to the role of CeeCee in the web series of Issa Rae, the acclaimed web series entitled The Misadventures of Awkward Black Girl (2011-2013 (aired from 2011 to 2013 and on which the television series is based in part Insecure). In the series InsecureSujata Day is still present, here in the role of Sarah.