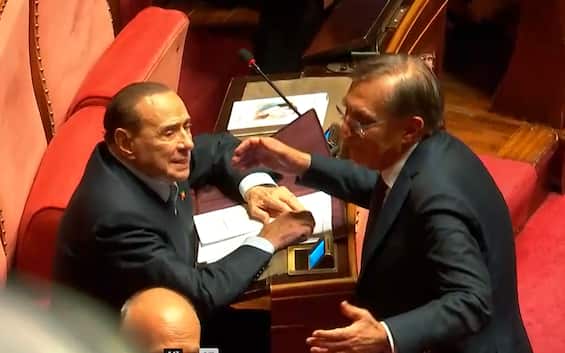 The images from the Chamber show the senator of the Brothers of Italy approaching the former premier and starting a heated discussion with him that seems to culminate precisely in the insult. Many assume that the Forza Italia leader addressed the new president of the Senate directly, but from the available frames it is not clear if the recipient of the bad word was really him. Il Cavaliere: “Negotiation over but it doesn’t suit us”

It is yellow about the brief interview held by Silvio Berlusconi and Ignazio La Russa while the votes were held that would soon sanction the election of the senator of the Brothers of Italy as president of the Senate, moreover with the support of various exponents outside the majority . From the videos of the Chamber, in fact, the former prime minister can be seen animatedly discussing with La Russa and then slamming his fists on the table and uttering a word that seems to sound like “vaffa …”. A video that immediately made the rounds of social media, even if from the lip alone it is not possible to understand who the alleged insult was actually addressed to (TOWARDS THE NEW GOVERNMENT, LIVE UPDATES).

While in the classroom the controversy in the center-right was inflaming for the decision of the forced senators not to participate in the first round of voting, the cameras of Palazzo Madama immortalized La Russa approaching Berlusconi’s seat and starting a conversation with him culminating in a gesture of anger by the Knight, complete with a swear word in tow. A behavior that then led the senator of the Brothers of Italy to interrupt the interview and leave in annoyance. According to many, the Forza Italia leader would have directed the insult to La Russa, who in 2012 left the Popolo della Libertà to found Fdi together with Guido Crosetto and Giorgia Meloni, but from the available frames it is not clear whether the word was actually addressed to him, to another person or addressed to an event they were talking about.

Shortly after the outcome of the vote that decreed the election of La Russa, Berlusconi himself intervened with a social message to try to defuse the controversy. “I am pleased with the election of Ignazio La Russa as president of the Senate of the Republic. Not only have I never had any confrontation with him, but we are collaborating loyally and in full agreement to give the country a stable institutional set-up and a strong and cohesive government, ”he wrote on Twitter.

Il Cavaliere: “It was Renzi”

Immediately after the tweet, Berlusconi commented on the outcome of the vote. To those who asked him about the negotiation on the government, also in light of the exclusion of the faithful Licia Ronzulli from ministerial roles, the blue leader replied: “It’s over but we don’t like it. We don’t like vetoes”. Then the attack on Matteo Renzi, accused together with Carlo Calenda of having expressed a good part of the approximately 19 votes outside the coalition that led La Russa to the nomination: “We knew that they and the senators for life would vote for him”.

Letta: “Coalition party wants to go to the government”

The outgoing secretary of the Democratic Party, Enrico Letta, was also disrespected by the outcome of the vote. “Irresponsible beyond all limits the behavior of those senators who have chosen to help a majority already divided and in difficulty from the outside,” said the leader of the dem. Who then added: “Today’s vote in the Senate sadly certifies that a part of the opposition is waiting for nothing more than to enter the majority”.