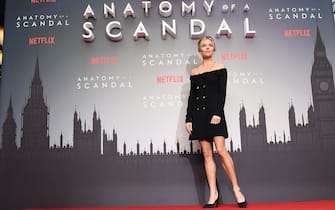 Sienna Millerprotagonist of the miniseries Anatomy of a Scandal, was one of the most photographed at the British preview of the show aired on Netflix (also visible on Sky Q and via the app on Now Smart Stick) which saw the participation of the entire cast. For the event, the actress wore a Giambattista Valli dress with double front buttoning and Chanel jewels

In the series, Sienna Miller she plays Sophie Whitehouse, the wife of the politician at the center of the scandal. Here, in the company of SJ Clarksondirector of the show

Sienna Miller, here’s how the actress and model has changed. PHOTO

Rupert Friend is James Whitehouse, a brilliant politician whose life, public and private, is turned upside down by the revelation of an extramarital affair which then becomes a rape charge

Michelle DockeryBritish actress known to the public for her long participation in Downton Abbey, on the show she plays Kate Woodcroft, a prosecutor who wants to jail the politician on indictment. At the premier she wore a dress by the award-winning designer Nensi Dojaka with Tiffany & Co. jewels.

Downton Abbey: the photos of the family protagonist of the film

Naomi Scottstar of Aladdin And Charlie’s Angels (in the show Olivia), in turn chose black, a dress with fetish details, in leather and metal, Roberto Cavalli

Naomi Scott: the most beautiful photos of the actress

Hannah Dodd she plays the young Sophie Whitehouse on the show. Also for her a black dress from the English brand David Koma with Bulgari jewels

Violet Verigo she plays Krystina, the family’s au pair. At the premier she wore a pinstripe blazer suit from the Le Réussi brand

The author of the novel Anatomy of a Scandal, Sarah Vaughan, attended the show as an executive producer. Her book was published in Italy by Einaudi