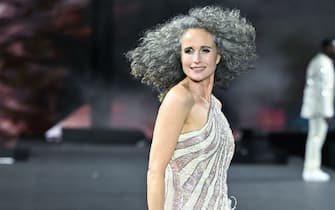 Among the numerous fashion shows with the collections for the 2023 summer season, the Paris Fashion Week hosted an exclusive L’Oréal fashion show. The event, entitled “Walk Your Worth”, celebrated the power of women through their beauty. Exceptional models, some of the most famous beauty ambassadors of the cosmetics and makeup house: among them, Andie MacDowell, historical face of the brand, certainly deserves a special place

Born in South Carolina sixty-four years ago, Andie MacDowell in her long and successful career, has established herself in the world of cinema, as an appreciated interpreter of memorable roles, and in that of fashion. Her place as a beauty icon has been consolidated with the collaboration with L’Oréal which has chosen her for several decades as the face for global campaigns of face and hair care products

Westwood parades in Paris while Vivienne goes on strike in London

For the fashion show at the École Militaire, with the Eiffel Tower in the background, the actress from Sex, lies and videotape she walked the catwalk with all her determination, sporting an amazing look. The attention fell on her dress but also on her hairstyle, of course salt and pepper for some seasons

A proud representative of female beauty at all ages, MacDowell first showed her thick gray hair after the lockdown season, a time when she deepened her reflection on her appearance that led her to a new level of self-esteem. and self-awareness

Andie MacDowell isn’t the only one in Hollywood who said goodbye to dyes. Color aside, her hair, now beautifully rich in shades of gray, is the same as hers when she enchanted onlookers in Four weddings and a funeral: thick, voluminous and naturally moved

The effect of MacDowell’s hair can also be reached through a hairstyle technique that is now very widespread, called “gray blanding”

For the show, the actress and model wore an evening dress with an eccentric and fun taste: a creation completely decorated with sequins with an American neckline and a vertical stripe pattern with a deep slit on the front and a feather-trimmed skirt. The di lei is one of the most striking looks of the show

Paris Fashion Week, the tops in the front row at the Saint Laurent fashion show. PHOTO

Even the eye makeup, made with a silver pencil, recalls both the dress and the hair tone of the diva

MacDowell has been sporting her new hair on the covers of the world’s most prestigious magazines for the past two years. Vogue Magazine, Poland edition, offered her to become the symbol of the issue on courage in October 2021. Her gray-haired actress is more beautiful than ever

Paris Fashion Week, from Chiara Ferragni to Beatrice Valli: the looks at the Calzedonia event

From magazines, to red carpets to fashion shows, Andie MacDowell is truly proud of her beauty choices in a world (and in a sector, such as entertainment) where age is a parameter that counts and conditions many careers. The actress told a People last summer to be happier than ever with her gray hair

Some of the most prominent women on the planet took part in the Parisian collateral event to the Fashion Week calendar, running until 4 October, all in the team of L’Oréal testimonials. The brand, leader in the beauty products sector in the world, has always promoted female beauty at all ages and, addressing a very broad and indifferent target, has recruited very different women as ambassadors.

Not only Friulian: autumn shoes, from moccasins, to cuissardes, to boots

In the grand finale, the special models gathered to pose embraced and smiling. Among them models, actresses and sports such as Eva Longoria, Cindy Bruna, Bebe Vio, Camille Razat, Gemma Chan, Emlia Clarke, and Soo Joo Park. In the background, the Eiffel Tower stands out

A close-up photo of the protagonists of the show

The final greetings of the L’Oréal women to the public

The models of the show take smiling photos in the backstage. In this photo, Andie MacDowell poses with top Cindy Bruna