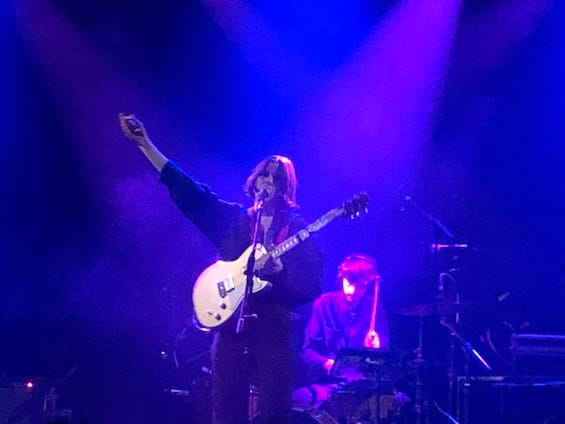 Ethereal on stage, poetess in music. Anna Carol she is one and many souls at the same time but above all she is a complete artist. His debut album Kinetics it’s like leafing through a photo album, from sepia to three-dimensional ones. On stage she has a sacredness of her with the light that illuminates her from behind and makes her contours as if wrapped in a magical aura. A little Patsy Kensit a little Madison Beer, charm and concreteness. I saw her set live in duo in Bologna, in a Locomotive that even with few people remains welcoming and full of positive sensations.

Anna let’s start from the history of the album which I know has something liberating about it: is it a condensation of kinetic energy? Furthermore, in the flames of the cover you burn the past and therefore theEvolution?

I burn the past but not voluntarily, the flames are the perfect energy that feeds itself. I am enthusiasm and sparkle of the eyes, I am never losing or giving up. The flames that I tell brought me to the disc and to many new acquaintances.
Heraclitus said that everything begins and ends in fire: is that right?

Absolutely.
I wonder then, taking I am here and his sense of uncertainty between the present and the past, if now you know how to accept yourself and if the footsteps are no longer the ones already traveled but are yours and are new.

It is the incipit of the album and it is the song of fragility and uncertainty. Here is a research path in my life. Sometimes I’m afraid I don’t have an identity and not being able to communicate it are the footprints.
Do you really walk around the house naked like you write in the song? But what I would like to say is that you don’t dress at random… after all, clothes can be a form of expression.

Yesterday at my mom’s I saw a doily she was working on and I asked her to pull up the shirt because I want it sewn on (I confirm that it is like an embroidery on the shirt he is wearing, ed). That too is a search for truth, music is a form of theatrical performance. However, sometimes yes, if I’m alone it can happen that I walk around the house naked!
Also in Dance there is a bit of melancholy: amnesia and the memory of a night like this. Listening to you sometimes I have the feeling that your kinetic energy has some break.

I have moments in which I would like to exploit creativity to the fullest. The fear of losing energy arises from the fact that sometimes it hides.
Now try to look beyond these walls: is this your version of Gino Paoli’s room without walls?

I’d like to have thought of it in these terms, I’ve been at home for a while yet I love the outdoors, the walls remain a limit so you look beyond.
How do you recognize those who count the stars instead of the hours and those who stop the planets from turning and then look at you?

He is a person who lives in the moment and enjoys it to the fullest. I like the connection with nature and the romantic side of her.
I usually admire the talent of others: What is the talent that others would like to admire in you?

Being good at playing and singing.
Don’t you believe that if this world were to change and reward who talent swallows it would it be an epochal revolution?

That would be a nice revolution. I don’t know why we don’t do it. Sometimes out of love we don’t look at what talent is.
In the end can I say that if you look closely you are still standing and that you have defeated physical and mental tiredness? That you stopped digging to look at things from the right distance?

In some moments I don’t think I’ve completely defeated her. In fact, sometimes I think so, sometimes I don’t. I promise myself to reach the right distance.
If they catch you in Sanremo, do you promise to play with John Coltrane?

I promise. On the other hand, I would like to play a wind instrument.
Is it really love to imagine yourself from afar?

Perhaps it is even more so than being close.
Francesco Guccini in his Useless try to invent spring togetherto give a birthday a little different…if love songs are so useless why can’t we do without them?

Because they help us atone for the suffering that love itself generates. To do without it is to lose a huge amp, it would be like me going on stage without the guitar.
A curiosity: your surname, Bernard, is poetic, it has its own charm. Why did you change it to Carol?

Something different was needed, I understand what you are saying but it never gave me that feeling. Carol has many motivations, one is the passion for Carole King. Then I had a group called Carol may knows.
What will happen in the coming weeks?

I have other dates, I will hold three concerts in Sicily and then one in Bolzano, at my home. I promise myself to play all 2023., to taste many stages.