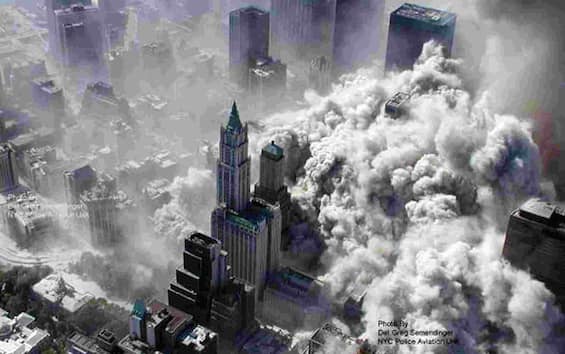 The attacks of 11 September 2001 in the USA shocked the world from a geo-political, social and communicative point of view. But they also had a violent impact on the cinema, music and TV series of the time. Hollywood has modified numerous films in the editing phase, often deleting scenes that could impact viewers (explosions, hijackings, the very presence of the Twin Towers in some sequence). Even radio stations have for a period avoided the airing of songs deemed “unsuitable” for that period of profound uncertainty. Here’s what happened in the post-9/11 US culture industry.

Movies, the deleted scenes of the Twin Towers

In the aftermath of the 9/11 attacks, Hollywood broke into how to deal with films already made and not yet released. Many (as in Zoolander) have chosen to remove scenes in which places affected by terrorist attacks such as the Twin Towers may have appeared. An uneven sign of respect for the victims: other directors and producers have in fact decided to keep the Twin Towers in the editing, as a symbol of patriotic pride. It is the case of Gangs of New York And Vanilla Sky. The film Spider-Man by Sam Raimi, released in 2002, has undergone numerous changes: the initial teaser trailer featured the superhero, grappling with a robbery, blocking a helicopter in a web suspended between the two towers of the World Trade Center. After the 9/11 attacks, the trailer was recalled. All the scenes of the film with the Twin Towers have been removed, but others have been added that pay homage to the resilience of New Yorkers, such as the one in which a resident tells Goblin “if you mess with one of us, you mess with all of us” Also the ending of Men In Black II was filmed because it was set at the World Trade Center, while Nosebleedan action movie with Jackie Chan, was directly canceled after the collapse of the towers, which should have been the location of the film.

Armageddon, Michael Bay’s 1998 film, has a scene where the World Trade Center catches fire after being hit by meteorites. The film first aired on TV in the summer of 2002, but that sequence has since been eliminated. Also Back to the Futurecult of 1985, when it was reassembled for TV in 2001 it was “purged” of all references to Libyans as “terrorists” (as well as the violent death of Doc Brown at their hands) and were transformed into “Libyan nationalists “. Another jewel of the 80s, ET the extra-terrestrial by Steven Spielberg, when it was brought back to theaters for its 20th anniversary in 2002, it was slightly modified by the director: in the original version, Elliott’s mother says of her Halloween costume “you won’t go like a terrorist”, which was changed to “you won’t go like a hippie.” In that same reissue, many of the weapons owned by government agents were also eliminated and replaced with walkie-talkies. Collateral damages, starring Arnold Schwarzenegger, sees the actor play a firefighter who takes on a group of Colombian terrorists after killing his wife and child. Initially scheduled for release in October 2001, it was moved to February 2002. The first trailer, which shows a bomb exploding in the US, has also been removed from circulation. Also cut in the final version is the scene in which the terrorists hijack a plane (scene which, if preserved, would have been Sofia Vergara’s film debut).

The TV series that mentioned the attacks

Some TV series were also immediately influenced by the events of 9/11. Immediately after the attacks, Aaron Sorkin wrote a special episode of The West Wing (titled Isaac and Ishmael) which aired on NBC on October 3, 2001 and anticipated the debut of the third season. The episode began with the cast addressing viewers directly and referring them to charities they could support. The episode sees President Bartlet and his staff discuss Islamic terrorism while in isolation in the White House due to a possible terrorist attack. With them there is also a group of high school students visiting Washington and it is an opportunity to discuss issues such as terrorism, US relations with the Middle East, the distinction between Muslims and fundamentalists. Another well-known case is that of Friends, a series set in New York and whose characters are closely linked to belonging to the Big Apple. The series was in its eighth season in the fall of 2001 and had to make changes to its first episodes. The season premiere ends with the black screen and the words “To the people of New York City”, a dedication to the people of New York. Instead in the third episode of the season a sequence was canceled in which Chandler is at the security checks in airport, before boarding a plane for his honeymoon. The character jokes about the sign “Federal law forbids joking about hijackings or bombs on the plane”, commenting: “Don’t worry about me, I’ll take my bombs very seriously ”. Obviously the scene was completely replaced: it was supposed to air two weeks after 9/11.

Music, the songs “banned” after the attacks

After the tragic events of 9/11, many radio stations in the US avoided broadcasting songs that could have hurt the sensitivity of listeners at that dramatic moment. The company Clear Channel (now called iHeart Media), which controls nearly 1,000 radio stations in the country, compiled a list of more than 150 songs deemed somehow “unsuitable” or that could lend themselves to criticism for their lyrics. The internal memorandum sent to the programmers was based on advice, it was not a censorship obligation. Songs with references to bombs were avoided (You dropped a bomb on me of the Gap Band, TNT of AC / DC), airplanes and flights (Learn to Fly of the Foo Fighters, Airplanes of the Red Hot Chili Peppers but also Rocket Man by Elton John), those with references to war or violent episodes (War Pigs of the Black Sabbath, Sunday Bloody Sunday of U2), to fire even if metaphorically (I’m On Fire by Bruce Springsteen, Fire and Rain by James Taylor, Burning Down the House by Talking Heads). Songs that even quoted heaven disappeared from the broadcast (stairway to Heaven of Led Zeppelin or Knockin ‘on Heaven’s Door in versions of Bob Dylan and Guns N Roses), hell (Highway to Hell of AC / DC, Run Like Hell by Pink Floyd, Disco Inferno of the Tramps), the end of the world or similar concepts (The End by The Doors,It’s the End of the World as We Know It REM), death ( Only the Good Die Young by Billy Joel, Suicide Solution by Ozzy Osbourne, Live and Let Die by Paul McCartney and Wings,And When I Die by Blood Sweat and Tears).

The images of people trapped in the upper floors of the Twin Towers throwing themselves into the void from the unbearable heat have deeply disturbed the world. Also for this reason, in the list of songs “to avoid” there are all those that mention the verbs jump or fall ( Jump of the Van Halen, Free Fallin ‘ by Tom Petty, Jumper by Third Eye Blind,When You’re Falling by Peter Gabriel). References to New York banned: although they could be considered gifts, they were considered inappropriate ( Safe in New York City of AC / DC or evenNew York, New York by Frank Sinatra). Stop also to songs with even veiled references to the Middle East or the Arab world ( Rock the Casbah of the Clash orWalk Like an Egyptian of the Bangles). The list (which was never officially circulated) also included the entire repertoire of Rage Against the Machine, a group often critical in its songs against American foreign policy and therefore considered divisive at a time when it was essential to preserve unity. of the nation. Finally, collecting various criticisms that reached the broadcasters, songs that spoke of peace or had messages of lightheartedness and harmony were also avoided ( Peace train by Cat Stevens, What a Wonderful World by Louis Armstrong, Imagine by John Lennon, Wonderful World by Sam Cooke e Obla Di, Obla Da of the Beatles). The memorandum remained in force for a few months and gradually returned to normal.

The case of the Strokes

On June 25, 2001, the New York group The Strokes released the double single it contained in Australia and Europe Hard to Explain And New York City Copstracks from their successful debut album Is This It. The songNew York City Cops it is a response to the murder of Amadou Diallo in 1999 and carried out by four plainclothes police officers. And in the chorus is the phrase “New York cops aren’t too smart.” In the American CD edition, not yet released, Julian Casablancas’ band decided to delete the song after the 9/11 attacks having witnessed the “valiant response” of the city police department during the tragedy, believing it would be ” It was wrong to release it during these highly sensitive times. ”The vinyl release, on the other hand, released on the day of the attacks, kept the original track list. Over the years the Strokes continued to perform the song live.