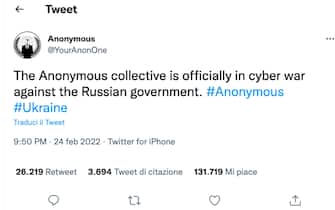 Anonymous declared one cyber war against Russia. The international group wrote a clear message on Twitter: “The Anonymous collective is officially in cyber war with the Russian government”

Anonymous took the side openly of Ukraine and, against Moscow, he has already launched a series of cyber attacks which made the sites of RT news, the Kremlin, the Russian government and the Duma temporarily inaccessible

But what is meant by cyber war? The term indicates all those activities that have as their objective create damage to computer systems Of every kind. It is a war that is basically fought only through the use of electronic technologiesinformation technology and telecommunication systems

In practice it is hacker attacks aimed at intercepting, altering and destroying enemy communication systems. Most of the time, behind a cyber war, there are specific political-military purposes

The basic rules of a cyber war they are: to minimize the expenditure of capital and productive and operational energies; make full use of technologies that facilitate investigative and data acquisition activities, data processing and subsequent distribution of the results to the commanders of the operational units; to maximize tactical communications, positioning systems and friend-foe identification

There cyberwar it should not be confused with cyberespionage or cybercrime which, although similar in the mode of action, have completely different purposes. Cyberwarfare takes place with attacks in the cyber space that can affect all three levels that make up this “space”: physical, syntactic and semantic

TO physical level the infrastructures that allow the communication lines to be kept active, such as computers, servers, computer devices in general, cables, satellites, would be destroyed. TO syntactic level computer systems are attacked using various types of malware, depending on the damage you want to cause, potentially destroying data on hard disks or to steal information

TO semantic level there is talk of social engineering attacks. In this case, hackers try to manipulate opponents with phishing campaigns or through social networks to be able to get hold of important data

Examples of cyber war were, for example, Georgia and Estonia which were the subject of DDoS attacks by hacker groups probably sponsored by agencies close to Russian government agencies. In 2016, however, hackers managed to take out several power plants of Ukraine

Agencies close to US and Israeli secret services they carried out IT actions to block the development program nuclear power of Iran. While the USA they admitted that they were under attack from several states, such as China and Russia with the two events that have gone down in history with the names of Titan Rain and Moonlight Maze