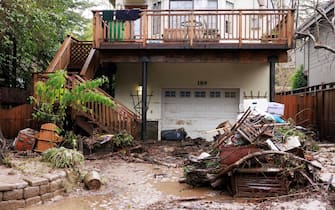 It’s still a severe weather emergency in California. After the floods of recent days and floods, residents are still dealing with rain and mud. And a new wave is upon us

WATCH THE VIDEO: Another bad weather emergency in California, rain and mud

In the most populous state of the USA there have been three weeks of unprecedented rainfall, which killed at least 19 people

All the news from the USA

The population is now preparing to face new heavy rains. A new “atmospheric river”i.e. a narrow band in the atmosphere carrying huge amounts of moisture from the tropics, is expected on Monday (public holiday in the US): it will bring “new waves of extreme precipitation”, warned the National Weather Service (NWS)

Meanwhile, in the past few hours a great wave of rain – and snow in the mountains – has hit many areas of the state, whose soils are already saturated with water. California Governor Gavin Newsom has declared a state of emergency

“It’s not over,” the California governor said at a press conference Gavin Newsom. He explained that even though the rain has decreased in intensity, the soils have remained waterlogged and the risk of flooding is still significant.

Aware of the tiredness of Californians after already several weeks of downpours, he later warned: “I urge all of us to remain vigilant and common sense for the next 24-48 hours”

Meanwhile, The alarm has also been raised regarding the Monterey Peninsula: could become an island following the expected “catastrophic floods” expected in California. Some areas have been evacuated amid fears that flooding will block major arterial roads, making public relief efforts difficult if not impossible.

So far in the San Francisco, Sacramento and Santa Barbara areas the rainfall in recent weeks is equivalent to the amount of six months or more. And even if California needs water after the scorching summer, the excessive amount of the last few weeks is causing nothing but problems

Storm in the USA and Canada: Fort Erie transformed into a city of ice. PHOTO