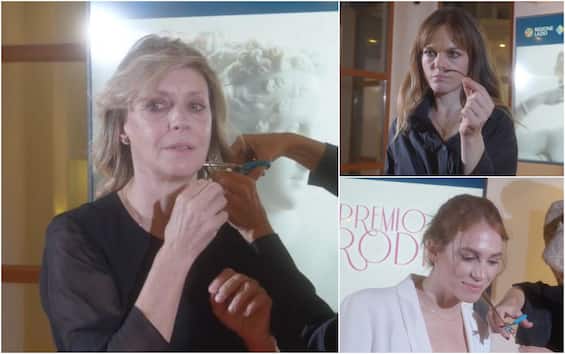 Italy also continues to show solidarity with Iranian women with gestures of dissent for the death of Mahsa Amini and Hadis Najafi. Yesterday, 1 October, during the ceremony of the 14th edition of the Aphrodite Award, the winning women present at the event cut a lock of hair to be sent to the Iranian embassy as a sign of closeness to the two girls killed by the police . Amini, 22, died after being taken to the police station for not wearing the veil correctly. The story sparked mass protests in Iran, severely repressed by the authorities who killed 21-year-old Najafi, the symbol of the movement against Amini’s death, with six shots. This year the Aphrodite Award went to Margherita Buy, Eugenia Costantini, Laura Delli Colli, Maria Chiara Giannetta, Matilde Gioli, Aurora Giovinazzo, Ludovica Martino, Gala Martinucci, Noemi, Ilenia Pastorelli, Maria Sole Pollio, Giulia Steigerwalt and Maria Sole Tognazzi (VIDEO).

Protests in support of Iranian women

The death of Amini and Najafi has shaken the consciences of many and all over the world for days protests have been going on for what happened, organized both in civil and institutional contexts. The MAXXI in Rome, for example, from Thursday 29 September opened an Info Point where you can leave a lock of your hair to be sent to the embassy of the Islamic Republic of Iran. The Milan Triennale did the same.

For years, the Aphrodite Award has been celebrating female personalities from the world of culture and entertainment. This year it was held in the Riviera di Ulisse Regional Park, in Lazio. The event started last September 30th and will close today, October 2nd. The award ceremony was hosted by the National Archaeological Museum-Archaeological Area of ​​Sperlonga and was conducted by Steve Della Casa and Liliana Fiorelli. The Prize, conceived and awarded by the Associazione Donne nell’Audiovisivo-Women in Film Italy, has been active since 1996.