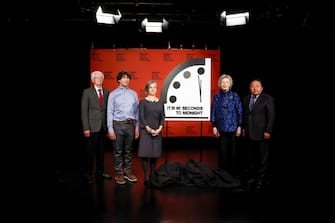 Less and less until the Apocalypse. That’s what the says Doomsday Clock, the clock established by the federation of atomic scientists in 1947 to give, every year, a symbolic indication of the time that human beings have available for safeguard the planet from a possible catastrophe, resulting from the use of nuclear weapons and the effects of climate change. Among the scientists who helped create it, Albert Einstein, J. Robert Oppenheimer and Eugene Rabinowitch

The “verdict” of this year’s doomsday clock is particularly ominous: according to the instrument humanity would have only 90 seconds at its disposal before reaching a point of no return towards its end. the data, worst ever since the Doomsday Clock has existed, it has undoubtedly been marked by the nuclear threat, which has reappeared forcefully due to the war in Ukraine and from concern for i climate changes

The best datum ever, the one in which humanity had the most time available to avoid its own end, was recorded for example in the 1991, the year of the end of the USSR and the Cold War. In that case the clock had registered 17 minutes to the Apocalypse

At the dawn of its history, in 1947, the clock had registered 7 minutes to the Apocalypse, since it was significantly worsened since 1949when the race of powers for nuclear weapons started, with the consequent hysteria in society, approaching midnight

In recent years, the prediction of the 2019when the Doomsday Clock had only given available to mankind two minutes before the point of no return

A disturbing fact, especially for the correspondence with that of the 1953, year of the grownups atomic weapons tests performed alternately by the United States and the Soviet Union

In the years after 2019, the situation got even worse, at least according to the clock, up to the minute and a half available to mankind recorded this year. Last year the clock set a time of 100 seconds available to humanity

The Coronavirus pandemic and the war in Ukrainethen, they only made the situation worse, undermining the certainties of humanity and bringing it ever closer to irreparable scenarios