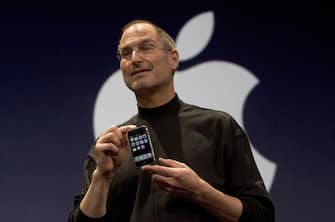 The January 9, 2007 Steve Jobs announced the imminent release of the first phone produced by Apple, theiPhone, which in a short time would revolutionize the world telephony market. Much has happened in these 15 years that separate the first from the last model released by the Cupertino house: here are all the smartphone created by Apple, from the Edge to the 13 Pro Max

WATCH THE VIDEO: Display, battery, photos: the characteristics of the iPhone 13

The first model, called iPhone Edge, it was sold in the United States starting June 29, 2007. In the following years it would be renamed “iPhone 2G“, because it can only support 2G connection

Steve Jobs, the story of the genius of Apple

The successor of the Edge is theiPhone 3G, marketed since 2008. The new device has a completely revised design compared to its previous one and a new operating system (iOS 4.2.1) which, thanks to the 3G network, guarantees a higher browsing speed. In 2009 an updated version is launched, theiPhone 3GS

Apple is worth 3 billion dollars: it is the first company to do so

The innovation at Apple continues in 2010 with the launch of theiPhone 4. With this model come one second camera and possibility of Wifi connection. A year later, on the new model 4S, the first version of the digital assistant will arrive Siri

HomePod Mini: everything you need to know about Apple’s smart home speaker

The 2012 is the year ofiPhone 5. The size of the smartphone increases: the display becomes four inches and marks the breaking of a limit on which the founder’s veto weighed. In 2013 theiPhone 5s andiPhone 5s, the second cheaper than the first

The third generation AirPods: the review

In 2014 arrive theiPhone 6 andiPhone 6 Plus. The dimensions are even larger and the burst mode function appears on smartphones (multi-shot) and the slow motion effect

Between 2015 and the 2016 the new models are also addediPhone SE, L’iPhone 6s andiPhone 6s Plus

Also in 2016, the iPhone 7 And 7 Plus: they are the first models to resist water. For the first time it is possible to activate the Home key with the recognition of theFingerprint

Together with the iPhone 8, theiPhone 8 Plus. The same year, to celebrate the 10th anniversary from the first smartphone, Apple also launches theiPhone X. The borders on the display disappear, the Home key is canceled and the fingerprint recognition is canceled. From here on, iPhone can be unlocked with identification face

In September 2018 come out on the marketiPhone Xs andiPhone Xs Max, natural evolutions of the previous model, with internal memory from 64 to 512 giga

Also in 2018 theiPhone Xr, similar to the Xs line but with improvements in the exploitation ofartificial intelligence

In September 2019 three new iPhone models are presented by Apple. This is theiPhone 11 (pictured), theiPhone 11 Pro andiPhone 11 Pro Max. Among the novelties, there are a double wide angle lens and the “night mode” to improve the night photos

All the news presented by Apple

In 2020 it’s the turn of the series iPhone 12. In addition to the basic model, the version is also available mini, that Pro is that Pro Max