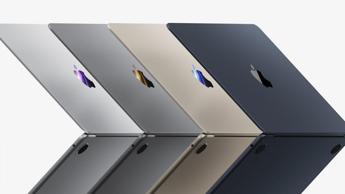 The MacBook Air with the M2 chip has just hit stores, but it seems that Apple is already thinking about a new version of its cheaper and more popular laptop. The analyst Ross Young launched the rumor on Twitter, which seems to come from reliable sources, according to which Apple has commissioned the production of 15.5-inch screens for a MacBook Air that will have these dimensions against the 13.6 of the current model. The launch date of this new product, according to the rumors coming from the production chains, shouldn’t take place before next spring. It is not the first time that Apple has made the Air in two dimensions: the 11 and 13-inch sizes were already available at the debut of the ultralight computer, but in the end this latest version remained the only one for years until the redesign of this year, which added a little extra space to the display. At the moment the only Apple laptop with a 16-inch maxi screen is the MacBook Pro which starts at 2,849 euros, a price prohibitive for many and which with the 15-inch Air would be cut by at least a thousand euros.