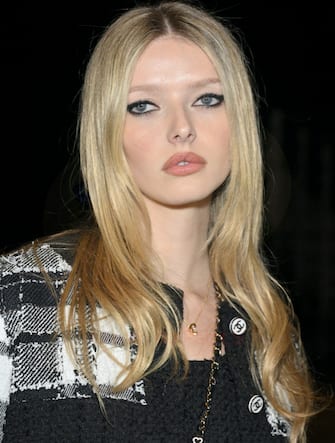 At the show, which has hosted stars from Marillon Cotillard to Charlotte CasiraghiApple took a seat next to the singer Angele And to the actresses Sadie Sink And Lucy Boynton

Chiara Ferragni in Paris, the look for the Dior fashion show

The girl, in one of her first public appearances, showed an obvious resemblance to mother Gwyneth

American journalist and fashion expert Derek Blasberg posted some photos of Apple on Instagram, all dressed in a classic look from the French fashion house

20 famous parents and children who acted together

The timeless charm of wedges in the latest fashion trends. PHOTO

«Karl Lagerfeld he met Apple Martin when she was 4 and told her that she would be a Chanel girl someday. It happened today!” Blasberg wrote in the caption of the Instagram post

Not only Chiara Ferragni, 12 stars who wore Schiaparelli

In the Instagram stories, Blasberg then defined the girl «small tart tatin»

Nails 2023, the nude trend beyond the French manicure

So far, mum Gwyneth and dad Chris have kept it confidentiality on the life of Apple, who attends college, but at the fashion show the girl sanctioned her entry (at least as a spectator) into the world of fashion