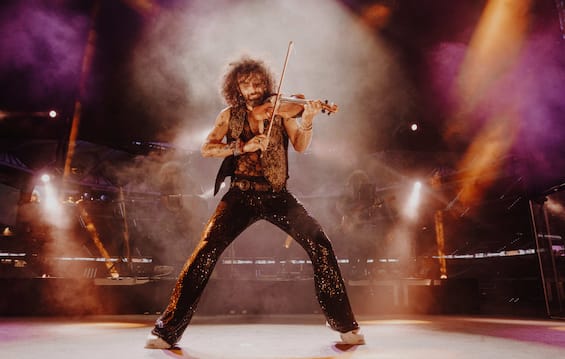 By popular demand, he returns to Italy Ara Malikian live for three unique dates in August: Ara Malikian World Tour, realized in collaboration with IMARTS, will stop on 2 August at the Auditorium Parco della Musica (Cavea) in Rome, a concert organized by VentiDieci, in the Rome Summer Fest line up of the Musica per Roma Foundation; on 3 August at the Vittoriale Amphitheater in Gardone Riviera (BS) on the occasion of La Milanesiana, conceived and directed by Elisabetta Sgarbi; and on 4 August at the Gran Teatro

Ara Malikian, genius of the violin and stage animal, offers a unique repertoire of its kind: among the greatest and most expressive contemporary violinists, he is a Spanish musician of Lebanese origin and Armenian descent; eclectic and brilliant, transversal, known all over the world for its unique way of expertly bringing classical music together with the sounds of the Middle Eastern tradition, of Gipsy, passing from Flamenco to Latin-American in a Cuban key, up to the most sophisticated classic-baroque citations, blending everything with rock’n’roll, punk bursts and hints of electronics. His talent was clear from a young age: despite the difficult circumstances dictated by the civil war, he found refuge from bombs by studying music. As an enfant prodige, he starts playing the violin ever since as a child, led by his father. His talent is soon recognized but the war in his country

of origin, Lebanon, forces the young artist to leave his homeland. At the age of twelve, Malikian performs in his first important concert, the forerunner of what is now a career full of satisfactions, of artistic encounters, of awards that consecrate the young artist as one of the most brilliant mviolin usicians to the world.

For his great return to Italy, he will be accompanied by a spectacular band, made up of excellent Cuban musicians: Ivan Melon Lewis (piano), Ivan Ruiz Machado (bass), Georvis Pico Milan (drums) and Dayan Abad (guitar).


Three unmissable events, among the most anticipated for next summer: the musician will present a cross-over show between concert, performance and mystical, exciting and frenetic experience. There will be opportunities to play live, for the first time in Italy, his new album of the same name “Ara”, an album dedicated and inspired by his son, as well as the rediscovery of childhood, amazement, imagination, languages, sounds of the magical and free world of childhood. Ara, before embracing his audience in Italy again and about his return to the stage,

says: “Children are the most authentic beings: they are wild, they are tender in their essence and they are full of truth; they are not afraid of making mistakes, they are free and expressive. Everything they do is full of art. By looking at children, we truly understand what we were and can no longer be. This tour is the result of my son growing up and growing alongside him: it is full of all those sounds and melodies that I heard inside and that inspired me. It is an encounter with the child that I could not be and that I would have dreamed of being. It is a tribute to free men like birds “.