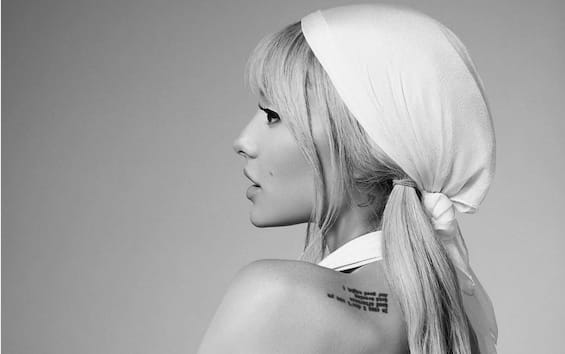 In time for the Christmas holidays, Ariana Grande has unveiled the images of the via Instagram new campaign taken for Vanilla mod And Mod Blush his first double fragrance.

Waiting for the 1st December on the shelves of Ultra Beautythe well-known American chain of beauty shops, the fragrance is accompanied by a black and white photo shoot where the singer-songwriter flaunts a look with a vintage flavor.

The vintage look for the new perfume

2023 will be a very sweet year, word of Ariana Grande who for the next season has decided to spread a delicate smell of vanillaessential ingredient of the new Mod Vanilla and Blush, double perfume soon on the market. With the rounded design packaging, the singer-songwriter’s new perfume is a candidate for excellent gift for the upcoming holidays.

Launched not by chance close to the great Christmas shopping season, the perfume is an invitation to let yourself be conquered by the softness that materializes in a scenario that evokes past eras. In the commercial shot by Stefan Kohli, Ariana Grande takes command of a vintage motorcycle but, more than the atmosphere, it is the singer’s look that says something more than the perfume: with the pink dresses, the flats, the earrings hoop and hair gathered in two low ponytails, Mod Vanilla and Mod Blush announces itself as a sensual fragrance euultra feminine.

The other perfumes of music stars

After its debut in the world of fragrances of 2015 with Ariwhich was followed by other bestselling products including Cloud which won the Fragrance of the Year: Women’s Popular Award in 2019, Ariana Grande is certainly not the only one to have taken important steps in the beauty sector with perfumes that bear her name.
To stay in the music world, another popular fragrance creator is the almost contemporary Billie Eilish which in 2021 it launched on the market Eilishalso vanilla, and spiced with notes of caramel and cocoa.
In 2021, in the summer, it came out Fenty Eau de Parfumwhich has gone on to enrich the already large range of products for the person of Rihannanow a guru in terms of beauty.
Having a personal fragrance for a star of music, or of the entertainment world in general, is considered the flagship of an entire career and often, for some, it is an enduring business that is not limited to the release of just one product – see Kim Kardashian who made his debut in the beauty sector in 2009 with just a perfume.
Also Katy Perry after Purr, his debut product, gave birth to a wide range of perfumes that bear his name; among the world famous pop stars a special place is occupied by Lady Gaga who made his debut in the field in 2012 with Hunger, first black perfume which had the characteristic of becoming colorless once sprayed.

But, of course, the idea of ​​linking a perfume to a music star goes back much earlier, with Jennifer Lopez to usher in the new millennium with the well-known fragrance Glow. In the 1910s, however, the perfumes of Madonnathe first, Truth or Dare with the same name of the documentary film about the singer from 1991, and by Beyoncé: Heat.