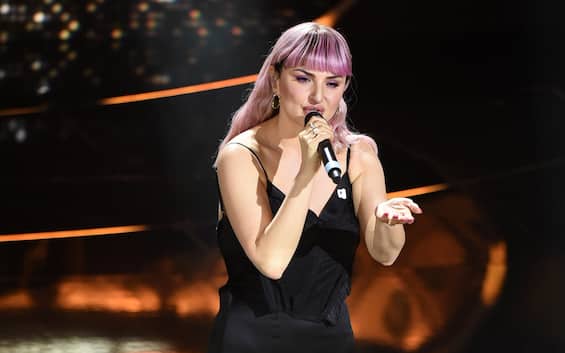 Arisa posed as mom did it (as they say) in a photo recently shared on her Instagram page. And – to stay on the theme of ways of saying – her post is making sparks thanks to the adamic costume that the singer proposes. This time we can really use the expression “Adamic costume”, given that Arisa herself writes in the caption: “I am every woman, but I am also a man”. Adding: “And there’s nothing wrong with me.”

The Italian pop star decides to celebrate the dawn of her forty years (which will turn next 20 August) by proposing a full nude on social networks, not without forgetting an important gender fluid message. In this shot there is also a lot of body positivity, an important life philosophy for Arisa and therefore always proposed to her followers.

The musician since the dawn of her career has been fighting to clear the acceptance of any type of physicality and aesthetics, besides she has had to face numerous attacks of body shaming, so she certainly knows what she is talking about.
A new chapter in her battle to finally crown acceptance is the photo you see in Arisa’s last posts (photo which is actually a video, made such to add the pecetta with effect bluring with which the artist had to censor the breasts, so as not to infuriate the Instagram algorithm).

At the bottom of this article you can look at the post in which Arisa shows herself without veils.

A toned and proudly unisex body

The physicality shown by Arisa in this new post shows a toned and lean silhouette, different from the one that characterized the singer when she was at the beginning of her career.
The voice of “I was romantic” wanted to share with his huge crowd of fans (his Instagram profile has 1.1 million followers) the image of his new body. However, even in this case, physicality becomes a means by which Arisa sends a message to her people (her audience).
“They are all women,” she writes in the post. “But I’m also a man,” she adds.

If from the sparse and cryptic caption it is not clear what the words relating to being also a man refer to, one of his Instagram Stories dispels all doubts: it is an allusion to the difficulty, complexity and consequent need to have a multifaceted and fluid self, to better face today’s very complicated world. «They are all women», Arisa writes in an IG story «because every woman hides the Universe within herself and we are all part of it. Beautiful, ugly, intelligent, and sometimes even stupid and superficial ».
And he continues, moving on to the Yang part of his whole (ie the masculine part, which completes the feminine Yin): “And I am also a man, because a woman alone in such a retrograde and macho society must learn to be one”.

The photographer Camilla Camaglia, whose homonymous studio is based in both Rome and Berlin, has signed the shot that is making the rounds of the web. In the official account called “Camilla Camaglia Photography” you can see other images of Arisa taken by the same photographer (we propose them at the bottom of this article, after the post of the singer).

In the photos Arisa shows off a new look, deliberately androgynous and perfectly interpreter of the new era dominated by gender fluid.

Before we mentioned Yin and Yang, concepts from ancient Chinese philosophy and at the base of Taoism: the new era in which one genus merges into the other is very reminiscent of the perfect circle symbol of Yin and Yang, the so-called Taijitu (the circle with the two parts, one white and one black). Just as the Taijitu turns out to be perfect and absolutely harmonious, this new image of Arisa also manages to shake the two genres in an admirable way.
The star now sports a pixie cut, worn in a disheveled rebel girl style. The look turns out to be androgynous but, thanks to a deliberately romantic and hyper-feminine make-up, the new Arisa confirms itself as the Taijitu of the gender fluid era we are experiencing.
This new Taijitu can find the perfect definition in the comment written under Arisa’s post by her friend Ema Stokholma (French radio / television presenter and Italian naturalized writer, aka Morwenn Moguerou): her brilliant comment is “Uoma”.

The usual comments from keyboard lions are not lacking

Since we are talking about a minefield (a social network), the comments of the haters could not be missing.
From those who bring up Photoshop (assuming that Arisa’s metamorphosis is due to digital retouching) to those who say that now she is no longer her (she is no longer the Rosalba we all knew), the post of the singer of masterpieces such as “The Night” he is not only collecting words of support, quite the contrary.

The accusations of having massively retouched his features are the workhorse number one: “You used very little photoshop in this photo,” comments a hater ironically. But Rosalba Pippa wanted to silence everyone by publishing an original photo, without filters: the body is almost identical to the first image. “Here is the original photo .. are you happy now?” Wrote Arisa. But the keyboard lions did not leave with their tails between their legs, on the contrary they began to overwhelm the artist with sexist offenses and comments.
“Since as a singer she is worth zero, now she tries to do the z ….” is one of the many shameful messages that Arisa unfortunately saw arriving (this comment was taken up by the artist herself, who published it in her Stories of Instagram).

Then there are the usual conspiracy theorists, those who believe it is a marketing operation or a gimmick to ride the wave of gender fluid and thus end up on the front pages of newspapers and on the home pages of websites.

Arisa’s reaction, which proves to be superior

Arisa has offered in these hours not only a great lesson in self-acceptance but also an interesting crash course on how to shrug when haters target you.
“Don’t worry, it’s all right. I’m too fi * a, ”she retorted, sending further positive messages to her large community of fans.

Since the short and enigmatic caption with which she accompanied the photo-video has aroused misunderstandings and doubts on the net, the singer has decided to deepen with several Stories, explaining why she feels both a woman and a man.
«They are all women: because every woman hides the Universe within herself and we are all part of it. Beautiful, ugly, intelligent and sometimes even stupid and superficial », she wrote in a long message. “I’m your whore, I’m the saint who forgives you, the fool who pretends to understand. The one who throws you out of the house when she’s had enough. ‘ And she continues: «And I am also a man: because a single woman in a society that is still so retrograde or male chauvinist must learn to be one. She must be strong and rude, able to fight the most vulgar machismo and misunderstanding on the part of some others of Us, without ever losing her femininity, continuing to love. And I don’t find anything wrong with that. ‘

Then there are the superficial (who wonder what diet he followed)

No less despicable than those who comment inappropriately accusing them of having trodden the hand with Photoshop (which Arisa has proved not to be true, showing the original photo without filters) there are then the superficial ones that stop at the surface, in fact, wondering what it is the miraculous diet that the artist followed.
To dispel the doubts of the aforementioned superficial ones, in reality no miracle diet has implemented Arisa’s physical transformation: the artist explained that the toned aspect of her body is the consequence of a considerable increase in physical activity and sports training. . But, for the record, if seeing Arisa’s post the first question that arises spontaneously concerns the diet, then perhaps it is the case to plumb a little more one’s soul, also dedicating oneself to another type of diet: the inner one. .