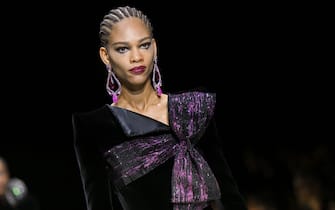 The new collection is pure feminine energy Armani Prive, Autumn 2022, presented in the middle of the Parisian Couture Week. Over ninety models that stand out for the refinement of the design and the meticulousness of the decorations of precious and ultra-bright jackets and evening dresses

As always, the outputs are grouped by chromatic order. In the first part of the show the block of black dresses is characterized by the refinement of the volumes, austere but always delicate. Also for next season there is no shortage of tulle and flounces

The geometric lines, often with bright and contrasting borders, of dresses and overcoats, recall the style of the 1920s and 1930s of the twentieth century, a real inspiration for this collection. Giorgio Armani wanted to bring the charm of that particularly elegant era back into the women’s wardrobe of the contemporary woman

In the collection, unmissable suits with long-cut jacket without lapels that bear the unmistakable imprint of the creative genius of King George

As always, Armani Privé is made up of looks to be admired in the smallest details, from jackets encrusted with crystals, sequins and embroidered beads, to jewels, which often complement already sumptuous outfits in a sophisticated way

Fluid trousers, made with fabrics on which light glides, are often paired with shimmering tunics, true tailoring masterpieces, which abound with crystals that sparkle in the light of day and night. Here, a selection of soft colors: for the winter Armani brings sky blue, dusty gray and very light pink to the catwalk

Valentina Sampaio is the first transgender testimonial of the Armani beauty line. PHOTO

Fuchsia, one of the most popular colors this season, is a shade that often appears in the Armani collections: energetic and vital, it is often combined with black for evening creations

All in pink, from Megan Fox to Kim Kardashian, the stars conquered by the Barbie style. PHOTO

Shoes also deserve attention, like clutches and handbags. Entirely made with bright details, they are designed to enchant the public on the most prestigious red carpets in the world

The finale of the fashion show is reserved for the creations in blue, the color dear to Giorgio Armani. In some cases, the evening looks parade complete with hats, also retro-inspired

Transparencies, tulle lace and sequin embroidery, the blue evening dresses are a triumph of the timeless taste of Armani, appreciated all over the world

Faithful to its tradition, even for the most luxurious dresses, Armani prefers medium length skirts and ankle-length skirts, also this taken from the style of the early twentieth century, an essential point of reference for its aesthetics.

The beloved blue is declined in all its shades, from intense blue to deeper shades. Even the darkest dresses appear very bright thanks to the glow of the sequins

Giorgio Armani greets the audience at the end of the show. Extremely elegant, in the dim light, he collects the applause of his admirers