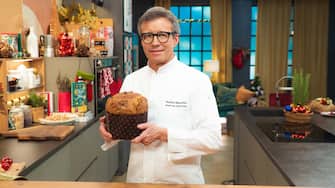 The Christmas holidays mark the return of the sweet format to TV Panettone Artists, produced by Food Media Factory and Level 33, with four Christmas specials, where the best pastry chefs in Italy compete in the creation of original Christmas sweets, inspired by the most famous of all, the artisan panettone. In the photo Chef Besuschio

Artists of Panettone 2022, returns with the new season. On Sky Uno from 19 to 22 December

In the four episodes, the pastry chefs will try their hand at preparing new recipes, all with a Christmas theme and which can be replicated at home, to inspire viewers and invite them to create surprising Christmas sweets with simple ingredients and traditional flavours. In the photo Chef DeRiso

In each episode, Maestro Luigi Biasetto, winner of the past edition of Artisti del Panettone, will make friendly forays, bringing his experience as a maitre patissier and sharing some of his very special secrets on preparing panettone

At the helm of the program, the curiosity and sweetness of Clare MaciTV presenter and writer, for the first time at the helm of a Sky program, which will accompany both spectators and pastry chefs during the preparations, with ideas and curiosities for making a perfect Christmas cake

Happy Christmas Happy Panettone, everything you need to know about the Milanese event

Monday 19 December, at 17:00 on Sky Uno and streaming on NOW, always available on demand and visible on Sky Go, the first episode, with the master pastry chef Lucca Cantarin which will offer its version of the very popular Pain Perdu, the French specialty that starts from waste materials to make them a real pleasure for the palate

From Bartolini to Cannavacciuolo, who are the Italian chefs with the most stars. The ranking

Paolo Sacchetti instead, he will prepare a sweet with a typically Christmas shape and flavour, the chocolate and orange tree

The second episode, the day after at the same time, opens as the best of the mornings of December 25, with the preparation of the master Andrew Tortora of the Sweet Christmas breakfast, consisting of a Christmas gingerbread, barbajada, a chocolate and coffee drink symbol of nineteenth-century Milan, and the ever-present pandoro

The Great Leavener Vincenzo Tiri instead he brings to the table a very special puff pastry donut, the Sfogliolato

Vincent Santoro brings to the counter of the 2022 edition of Artisti del Panettone one of the sweets most loved by the general public, the supreme Monte Bianco

Francis Borioli of the Infermentum Laboratory surprises Chiara Maci and the public with a delicious recipe to “remise en forme” for the holidays, a Christmas Pinzimonio, composed of a fried pandoro accompanied with various creams, from chocolate ganache, to creme anglaise, to zabaglione with moscato

In the last episode of December 22, grand finale with Joseph Pepewhich offers its irresistible interpretation of the Christmas Tronchetto, declined in lemon snow white

For the first time under the direction of Chiara Maci, Panettone Artists arrives on Sky and streaming on NOW from 19 to 22 December, at 17:00