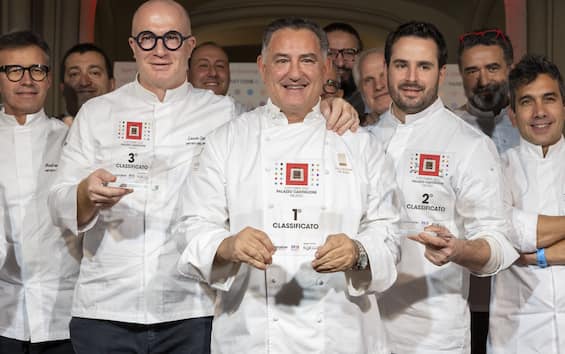 Salvatore DeRiso wins “Artisti del Panettone 2022”, the competition that rewards the best traditional classic low panettone without icing, organized in partnership with the Gazzetta dello Sport, judged by a team of experts, led by the president of the jury Luigi Biasetto of the Biasetto pastry shop of Padua, champion outgoing and a selected group of journalists from the food sector. There awardsconducted by Carla Icardi, was held this morning at Palazzo Castiglioni, as part of “Happy Christmas Happy Panettone”, an initiative aimed at enhancing the typical holiday dessert, organized by Confcommercio Milano with the participating associations involved, Food Media Factory, MNcomm and APCI – Professional Association of Italian Chefs, with the patronage of the Lombardy Region, the Municipality of Milan and the Milan Monza Brianza Lodi Chamber of Commerce and the support of Fiera Milano.


Salvatore DeRiso of the Sal De Riso pastry shop in Minori (SA) won the gold medal, in front of Andrew Tortora by AT Patissier e Lucca Cantarin of Pasticceria Marisa, second and third place respectively. The representatives of the Consortium of Asti, Agrimontana and Molino Dallagiovanna presented their respective plates on stage. “We evaluated fifteen great professionals but also great men – declares the President of the Jury and outgoing 2021 champion Luigi Biasetto – because an artist is a person who lives in symbiosis with his mother yeast. They follow it daily because sourdough is something alive, it has a soul”.

During the event he was also awarded Alexander Herculesborn in 1996, of the Canasta pastry shop in Cattolica with the recognition for the best panettone under 35 – novelty of this edition – with the following motivation expressed by the President of the Jury: “We wanted to reward the great research work of the quality of the ingredients used in the dough and for the perfection of the execution in full respect of the origins and tradition of the Milanese panettone”. Alessandro Ercoles currently works in the family pastry shop with his father, Maestro AMPI, Marco Ercoles.

For the under 35 category he finished second Antonio Giannotti (Pasticceria Perrotta Gigliola di Montella, AV), on the third floor Marco Battaglia (Pastry shop Marlà, Milan). Finally, to the chef and pastry chef John Ricciardella, 31s, the Cascina Vittoria restaurant in Rognano (PV) was awarded the GazzaGolosa prize by Gazzetta dello Sport for the path of absolute excellence accomplished in the sector of leavened products: from bread to focaccia, from Colomba to panettone!