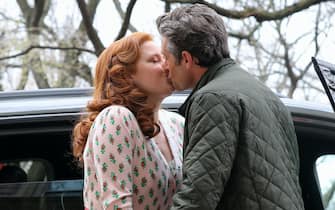 Amy Adams and Patrick Dempsey, engaged on the set of As if by magic 2, were photographed during the filming of a scene where they exchange a sweet kiss. The two actors were the protagonists of the first film, Enchanted – As if by magicof 2007

WATCH THE VIDEO: “As if by magic 2”: Patrick Dempsey in the sequel

Filming the sequel to As if by magic were made in 2021 and officially ended during the summer in anticipation of the film’s streaming debut in the fall of 2022. Since March, the actors have been summoned for additional filming in New York, requested in post-production.

As if by magic 2, the official logo of the film unveiled

As if by magic 2 will see Amy Adams and Patrick Dempsey again as their characters, respectively Princess Giselle of Andalasia and divorce lawyer Robert Philiph. The two, who found themselves in love in the first film, are now in a new phase of their life together

Patrick Dempsey, between Devils and Grey’s Anatomy, a birthday series

In As if by magic 2 Amy Adams / Giselle uses a spell to turn her new family life into a perfect fairy tale but not everything goes the right way and she will have to fight to save her loved ones, on Earth and in the kingdom of Andalasia

Patrick Dempsey in As if by magic 2 will return to play his character, attorney Robert Philip. In the sequel, the family decides to leave Manhattan to move to the suburbs

As if by magic 2, James Marsden and Idina Menzel in the cast

A close-up of actress Amy Adams with the look of Princess Giselle, now grown up and more mature. For her first performance in 2007, she received numerous nominations for the most prestigious awards in the industry

The best films to see in April 2022 in streaming and at the cinema. PHOTO

The photos on the set show Patrick Dempsey standing next to his family car surrounded by luggage. Could this be the scene where the group leaves the Manhattan house?

Disenchanted, shooting of the sequel to Come d’incanto is underway

Amy Adams is entertained on the set with Gabriella Baldacchino, the young actress chosen to play Morgan, the daughter of Robert Philip already seen in the first film and now a teenager

Devils 2, official trailer of the series with Borghi and Dempsey. From 22 April on Sky

Amy Adams, Patrick Dempsey and Gabriella Baldacchino together on the set in New York

One last shot for the two protagonists of the scene spied on by photographers. As if by magic 2 should debut later this year in streaming on the Disney + platform, also visible on Sky Q and via the app on the Now Smart Stick. At the moment there is no information on the release date