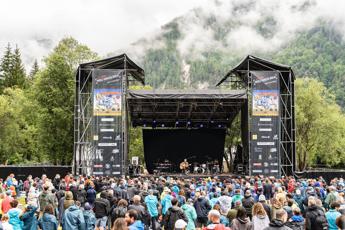 The three leading artists at the Fusine Lakes in front of 1,500 people

A show between trees and mountains, with the sounds and colors of unspoiled nature as a backdrop. This is the winning formula of the 27th edition of the No Borders Music Festival, the event that animates the Tarvisio area, and which today welcomed Casadilego, Daniele Silvestri and Asaf Avidan on the stage, protagonists of three unique lives of their kind, in a setting breathtaking on the border between Italy, Austria and Slovenia.


The three artists gathered 1,500 people around the Fusine Lakes: fans and curious but also trekking and mountain enthusiasts, arrived on foot or by bike to enjoy the enchantment of a high altitude show in the name of environmental sustainability. . For artists of the genre, no introduction is needed and the public knows it: they sing, clap their hands in time and let themselves be carried away by the magical atmosphere of the place, the mountains lapped by low-altitude clouds and the mirror of the water of the nearby lake.

Not even the rain worries the audience, equipped with raincoats, backpacks, hats and colored umbrellas. On the Casadilego stage, Silvestri and Asaf Avidan do not spare themselves: they play, sing, lull the audience and get excited together with the crowd. Elisa Coclite, aka Casadilego, starts with some of her strong pieces, ‘Lontanissimo’, ‘Dimmi’, ‘Kitchen sink’, which begins as a spoken word and then becomes pure melody. Ed ‘Edinburgh’, written during the lockdown period.

“I was in quarantine on the bed of my bedroom and I wrote it because I missed Edinburgh – says the singer on stage – today this wonderful green reminds me a little. I never imagined singing it in front of all these people and I feel like crying “. The audience appreciates and applauds, then she sings in chorus. “You are beautiful” says the singer, multi-instrumentalist and exceptional interpreter, a voice and a charisma that conquer everyone.

There are people of all ages, families with children, couples and friends who have made an appointment here. It is 1 pm when Daniele Silvestri starts in fourth, alternating with the piano and the guitar. He attacks with ‘The Ships’, and brushes up some of the key pieces of his repertoire. ‘Flamenco’, ‘The things we have in common’, ‘Streets of France’. He mixes talent and tradition, as only he knows how to do, light pieces and civil commitment. “At a festival called No Borders – he tells the audience before attacking ‘La mia casa’ – I can’t help but make this song, which wants to tell the feeling, which is also a way of life we ​​know as children, to consider any a place we visit as our home. Instead, they teach us how to draw walls and borders, but that’s not how it works “. The applause starts, the audience calls him, claps his hands to the rhythm, laughs, lets himself go. Here is ‘My enemy’, ‘Trivia’, ‘Oriental eyes’, ‘La paranza’, ‘A closed mouth’. The enveloping notes of Asaf Avidan close the day.

For the first time on the stage of the No Borders, the Israeli singer-songwriter, highly regarded internationally, offers emotions and vibrant rhythms for over an hour of show: the harsh, unmistakable voice enchants the audience to the rhythm of some of his hits: the ‘opening dedicated to’ Lost Horse ‘,’ 900 days’ and ‘Different pulses’. Then ‘Anagnorisis’, the song that gives the name to the last album, ‘Rock of Lazarus’, ‘My hold pain’ and ‘Love it’, up to ‘Jail’, ‘Bang Bang’ and ‘One Day / Reckoning Song’ , one of the artist’s best-known hits, who draws the audience thanks to the thousand shades of his voice and the genres experienced on stage, from falsetto to ballad, through blues, rock and folk in a magical and overwhelming atmosphere .

“We are really happy to be here – says Avidan -. We want to be introspective and squeeze every emotion from the human soul, we want to make live music without the aid of computers, to the best of our ability”. Successful mission. (by Federica Mochi)