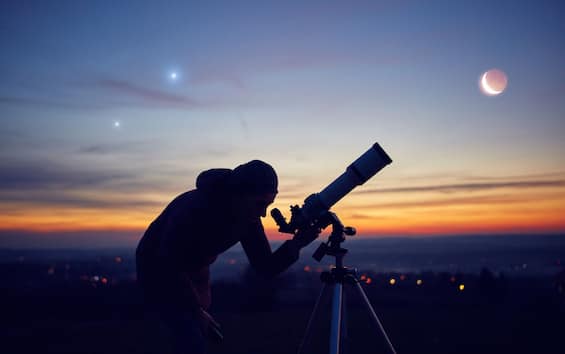 December, the month of Christmas, holidays and vacations. But also the first really cold month of winter. This year, the last month will be particularly rich for those who love to admire the sky and the stars, thanks to a series of events that will follow one another and that will mark some of the festive periods of the month.

December’s full moon is called the “ice moon,” a name that comes from the first true winter temperatures, which make the larger satellite and of a more candid color in our eyes. In the United States they call it “beaver moon”, an ancient tradition that derives from the period in which traps were placed to catch rodents, before the waters of the swamps froze. It was a way to have new fur coats for the winter. But this name can also be connected to the Native American tradition, who realized that in this period the beavers completed their dens before the harsh winter. This year the full moon of December will be between Wednesday 7 and Thursday 8.

Astronomy enthusiasts cannot miss this extraordinary event in which Mars will be hidden by the Moon. An astral conjunction not particularly rare but still exciting for those who have a passion for scrutinizing the sky. This month Mars will result in eclipse in the night between Thursday 8 and Friday 9.

Astronomically speaking, the winter solstice is one of the most anticipated events. The December 21st the shortest day of the year will be recorded because the North Pole of the Earth will have an inclination of such a level as to be further away from the Sun. This is the day when the astronomical winter begins. But it will also be the last major event of 2022, so it is advisable to enjoy it so as not to miss the opportunity to witness a sky which, if clear, will be particularly starry. It is advisable to always go to poorly lit places to enjoy the astronomical phenomena to the fullest.