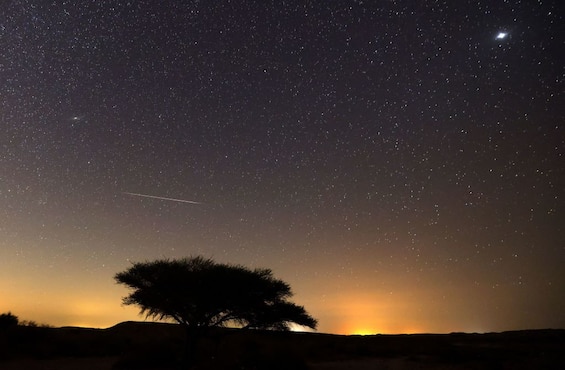 Lucky moment for all astronomy enthusiasts. The Neanderthal comet, which visited our planet about 50,000 years ago right at the time of our cousins, is approaching the Earth. In addition to this celestial phenomenon, an approaching asteroid has also recently been sighted. Astronomical events have been organized for both events in the coming days.

Observing the Neanderthal comet, however, will be less easy than previously thought. “The latest images show it slightly weaker than expected, so the use of binoculars is still recommended,” explained Paolo Volpini of the Italian Amateur Astronomers’ Union (Uai). “Furthermore, it is important to find an observation site as free from light pollution as possible,” added astrophysicist Gianluca Masi, head of the Virtual Telescope Project. Comet C/2022 E3 (ZTF), as it is called by astronomers, will be at its closest distance from the Earth on February 1 at 18.11 Italian time, passing about 42 million kilometers. “Unfortunately, the brightness of the Moon will also disturb the observations, so the best moments to observe the comet are those close to dawn, when the Earth’s satellite sets,” commented Masi. “However, the comet will not pass very close to the Moon: from January 26 it will be visible in the constellation Ursa Minor and from the 29th it will be close to the North Star”, added Volpini, “we hope that the weather will be favourable”.

The astronomical initiatives to see the Neanderthal comet

In any case, enthusiasts will be able to admire the passage of comet ZTF (C/2022 E3) thanks to the many initiatives of astronomers and amateur astronomers: the Virtual Telescope Project is planning a live online broadcast on February 2, starting at 5.00 am Italian time, while the educational program of the National Institute of Atrophysics (Inaf), EduInaf, in collaboration with the Uai organizes a live broadcast on the evening of January 30, starting at 21.00. During the event, the most beautiful photos of the comet taken by participants in the astrophotography campaign ‘A comet among the winter stars’, promoted by EduInaf and Uai, will also be shown. In the same evening and in the immediately following ones, events are also scheduled at the observatories throughout Italy managed by the Uai delegations.

The asteroid, on the other hand, “will pass just under 10 thousand kilometers from the center of our planet”, said astrophysicist Gianluca Masi, head of the Virtual Telescope Project, therefore about 3,500 kilometers from the surface. Renamed 2023 BU, the object was discovered only five days before its close encounter with the Earth, expected for January 26 at around 10.17 pm Italian time (the time could vary by about 2 hours more or less) . This is the third asteroid since the beginning of the year to fly past our planet from a close distance, less than that between the Earth and the Moon, and it is the fourth closest on record. 2023 BU was sighted by engineer and amateur astronomer Gennadiy Borisov on January 21, at the Margo Observatory in Nauchny, Crimea. Borisov is also known for discovering the first known interstellar comet, 2I/Borisov, in 2019.

The asteroid followed by the Virtual Telescope Project live online

The asteroid was immediately studied by several astronomical observatories around the world, such as the French observatory of Saint-Pardon-de-Conques, the English one of Great Shefford (both private) and the US national one of Kitt Peak. With an estimated diameter of between 3.7 and 8.2 meters, 2023 BU belongs to the so-called Apollo asteroid group, which includes celestial bodies that are potentially dangerous to the Earth due to the possibility of a catastrophic impact: for example, the Chelyabinsk meteor, which exploded over the city of the same name in 2013, was an Apollo asteroid. Currently, the asteroid is located in the constellation Ursa Major, at a distance of less than 900,000 kilometers from our planet, and is traveling at about 9.3 kilometers per second. The appointment with the Earth will be followed by the Virtual Telescope Project, which has organized a live online broadcast on January 26, starting at 8.15 pm Italian time.