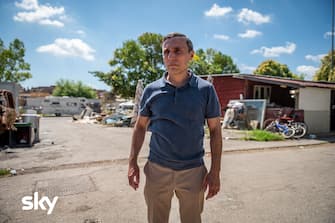 After going out for a walk, Sandro has a crisis and gets lost

WATCH THE VIDEO: Everyone is fine at home – The series. Carlo from the extortionists. The clip

Helped by some people in a nomad camp and by the army soldiers, Sandro manages to contact Beatrice, desperate for her disappearance

At home all well, the photos of episodes 5 and 6

Meanwhile, Carlo goes to talk to the loan sharks to whom Riccardo owes 50 thousand euros. He offers to save the debt with checks, but they take his car away. When the situation seems resolved, Luana tells Riccardo that she has denounced the brothers who were blackmailing him

At home all well, the photos of episodes 3 and 4

Sandro and Beatrice go to the seaside villa in Ansedonia (a fraction of Orbetello), where their marriage has been moved as the seals for the shooting are still in the San Pietro restaurant. Here, in the middle of the night, Sandro goes out into the garden and starts digging. Ginevra wakes up hearing a noise, sees that Sandro is not in bed with Beatrice and goes out to look for him. When he finds it he sees that a skeleton is buried in the garden

At home all well, the photos of episodes 1 and 2

Frightened, Ginevra calls Carlo to ask him to go immediately to the beach house. When he arrives he tells him what he saw

WATCH THE VIDEO: Everyone is fine at home – The series, episode 8: Ginevra investigates

Carlo tries to talk to Sandro about it, but he doesn’t remember anything from the previous night

Meanwhile, preparations for the wedding continue. As the guests begin to arrive, Sandro and Beatrice go for a bath

At the wedding there is also Luna, Carlo’s daughter, who is completely reconciled with her father

The mayor of Orbetello marries Beatrice and Sandro

The two are having their perfect day. Or so it seems

After the ceremony, Ginevra, who organized the wedding, tells the guests to sit down

Between the tables, however, tension continues to spread

Geneva, however, continues to suspect

While the children are on the beach, the situation worsens

At that point he puts the pieces together and, as the memories surface, he decides to deal hard with his mother

Now discovered, Alba confesses: the body in the garden belongs to the girl, who died during an argument with her 30 years earlier. To help her hide the body was Maria, while Pietro, who had learned, had decided not to report her, however, cutting off any sentimental relationship with her.

During the clash between Paolo and Alba, Carlo also arrives, who then hears his mother’s confession. The two are not the only ones, however, even Ginevra, from behind the door, hears everything

Alba also tells the truth to her daughter Sara

The tension finally breaks out. Ginevra and Sara are shocked by the truth, Carlo tries to keep his mind clear fearing for the interests of the family. However, Ginevra decides to leave him and take the child away

While Alba confronts her children, the acquired part of the family watches from the steps that lead to the sea