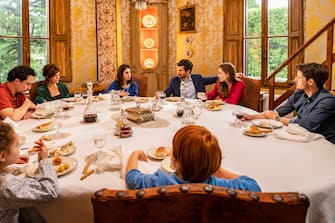 WATCH THE VIDEO: Everyone is fine at home, family lunch. The clip

At one point, husbands and companions are turned away from the table

At home all well, episode 1 and 2 summarized in 30 photos

At home everyone is fine, Jovanotti’s theme song

Fresh from joining the company that manages the family restaurant, Riccardo is still elated

At home all well, the differences between the film and the TV series

So he decides to invite a group of friends, his guests, to the restaurant. But the idea annoys the cousins

At home everyone is fine, Gabriele Muccino and Barbara Petronio speak. VIDEO

At home everyone is fine, Emma Marrone is Luana. VIDEO

Meanwhile, Carlo tries to convince his sister to vote in favor of the purchase of the residence in Sardinia for which he paid a deposit of 700 thousand euros with the restaurant’s money

WATCH THE VIDEO: Everyone is fine at home, the clip: Riccardo and Carlo

Paolo decides to take Giovanni away. The two go to Isabella and Cristina’s beach house

WATCH THE VIDEO: Everyone is fine at home, the clip: surprise for Diego

During the trip to Fregene, Giovanni risks drowning, but is saved by some bathers while his father lingers with Isabella

Carlo has the problem of buying a villa in Sardinia, an important investment for which he needs the approval of his brothers and his cousin Riccardo

Paolo and Carlo vote in favor of the investment, Riccardo, surprisingly, votes against despite the promise made to Paolo to support Carlo’s initiative. Sara vote against, the investment is rejected

Beatrice has an idea, to hire Sandro at the restaurant, and talks about it with Riccardo. Sandro, however, has no intention of going to work at his cousins’ restaurant

Meanwhile, Carlo asks for and obtains an extension from Mandolesi for the deed of the residence in Sardinia

Meanwhile, Alba, having learned that Sara voted against Carlo’s project, decides to speak with her daughter

Sara says she only wanted to respect her father’s wishes, her mother replies that her father never wanted her to marry Diego

Ginevra tries to talk to Carlo about the affair in Sardinia, but he closes himself by telling her that it is a complicated matter. Ginevra complains, tired of being treated like the one she can’t understand

Sara, tired of waiting for her husband and suspecting his infidelity, decides to visit him by surprise in Sorrento. Diego is forced to rush his lover Regina out of his hotel room

Diego and Sara have breakfast together when Regina arrives, introducing herself to her lover’s wife as a colleague of hers. Sara continues to suspect more and more

After a visit to the doctor, Sandro gets discouraged and talks to Beatrice, his future wife, asking her what she is still doing with him and thinking sadly about the day he will forget her

Meanwhile, unable to withdraw € 50,000 from the restaurant’s account without his cousins’ okay, Riccardo decides to steal hams and wines to try to repay part of his gambling debt.

Riccardo is discovered and the tension explodes during an evening that sees two ministers having dinner at the San Pietro. Carlo and Riccardo come to blows and the security of the ministers intervenes to make a report