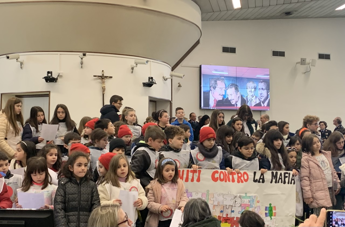 From Totò Riina to Matteo Messina Denaro, from the anti-mafia of thirty years ago that operated in a fearful society to today, to the anti-mafia of the future, of children growing up in a society that is less afraid of bosses and who every day in the oratories parishes adopt the values ​​of legality and respect for rules and people. The “Church on the move” of Pope Francis, from the daily work of the speakers, manifested itself blatantly today in Palermo with the “Caravan of legality” which reached Palermo from the snow-capped peaks of the Madonie chain, bringing the challenge of the new generations to the mafia. Two hundred and fifty children from the parish oratories of Petralia Sottana, Sclafani Bagni and Bompietro-Locati and the children from the “Fondazione Regina Elena” housing community in Cefalù, with parents, mayors, parish priests and teachers, to the rhythm of the slogan “Sicily is ours and not What ours”, they marched up to the bunker hall in the name of Giovanni Falcone and Paolo Borsellino.

Here, where the real anti-mafia turning point of the state began, the thirty-year protagonists of the season of the maxi-trial and the massacres, Leonardo Agueci, Giuseppe Ayala, Vincenzo Terranova and Giovanni Paparcuri, moderated by the journalist Elvira Terranova of Adnkronos, told the children about the violence , the ferocity of the bosses on trial and fugitives, the terror of the people, even the unpreparedness of the state in those bloody years, then the turning point in the investigations impressed by the anti-mafia pool and the police and the redemption of civil society. In turn, they have learned from today’s children what their idea of ​​the mafia is, seen through the eyes of those who can now choose to live hoping for freedom even in inland towns. Finally, a symbolic passing of the baton from the anti-mafia of the past to that of the future: judges, witnesses, mayors and institutions, teachers, parents, parish priests and children, all together they composed the puzzle of an emblematic sentence with the tiles: “United against the Mafia”.

The sense of the initiative is condensed in the words of Melissa, 17, from Sclafani Bagni: “With this initiative, we young people and children together want to raise awareness in society against this phenomenon. We see ahead of us a future that is certainly different from that of the young people of past years, but it must be us children and young people, we who are the future, who are committed to ensuring that there is no return to the past”.

“If we are here today with all the parishes and oratories – commented Don Giuseppe Licciardi, vicar general of the Diocese of Cefalù – it means that the Church has fulfilled its task, that of being parishes present in the area alongside people experiencing problems Of every kind. The daily work in the speakers on legality represents the realization of one of the objectives indicated by the judge Rosario Livatino: to transform us from ‘believers’ to ‘credible’. And that is what these children demonstrate today and push us to do”.

Compact adhesion of civil society around this commitment, condensed by the words of the mayor of Petralia Sottana, Pietro Polito: “We thank the priests for this, which we can define as a ‘crazy’ initiative, that of putting the daily commitment of institutions and families in symbiosis , generations of the past and of the future, around the precious parish realities of our oratories”.