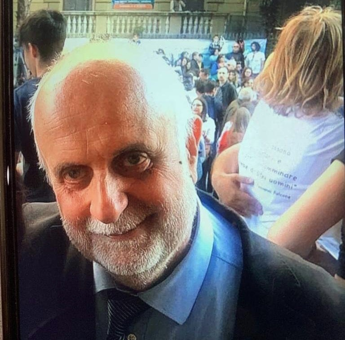 Even if he is not physically present, the presence of Vincenzo Mineo in the bunker classroom of the Ucciardone prison in Palermo is palpable. He was the ‘keeper’ of the bunker that hosted the first maxi-trial against the mafia. Historical memory. Vincenzo Mineo died on May 10 a year ago from a fulminant heart attack. And today his name resounded in the bunker hall during the naming ceremony of the spaceship, as it was renamed at the time of the lightning construction, in the presence of the Head of State. To remember him, together with the President of the Maxiprocesso Alfonso Giordano, was during his speech the President of the Court of Appeal of Palermo, Matteo Frasca. Who thus wanted to pay homage to the figure of Mineo and Giordano.


Vincenzo Mineo’s first meeting with Giovanni Falcone took place in the autumn of 1985, a few months before the filing of the so-called ‘Indictment order’ for the maxi-trial. Giovanni Falcone’s secretary’s room was assigned to the Education Office. What today is called the ‘bunkerino’, with the museum dedicated to Falcone and Borsellino, at the time contained hundreds of folders. It was the first time that judges and officials had been working on such a huge trial, with hundreds of defendants. And Mineo in that phase dealt, alone, with all the procedural positions from the point of view of the provisions on personal freedom. Before the indictment there were 706 suspects which became 475 defendants indicted, of which about 300 were detained.

Mineo passed away a year ago at the age of 69, leaving behind his beloved wife Esther, now present in the bunker classroom, and their children. He was the first to have the keys to the Ucciardone bunker room. He was considered by all to be historical memory. He had retired and in 2018 but until then he was always present, at all the most important trials, which took place at the Ucciardone. He was also a sort of ‘Virgil’ for the many judicial reporters who frequented the court. Always kind, always available, always generous. It was Mineo who accompanied and ‘guided’ the more than 500 accredited journalists to the bunker for the maxi-trial. A bunker built in just nine months. The transfer of the documents (over 600 thousand sheets that would soon exceed one million and other computer media) was completed a few hours before the start of the trial.

When Giovanni Paparcuri died last year, the judicial driver of judge Rocco Chinnici who survived the massacre in via Pipitone Federico, said: “Vincenzo Mineo, now you will protect me too … from up there. Hello”. Mineo was also present in the courtroom when, on December 16, 1987, President Alfonso Giordano read the operative part of the sentence for an hour and a half: 19 life sentences and 2665 years of imprisonment. And it was also today, albeit not physically, during the naming ceremony of ‘his of him’ bunker room to the beloved judges Falcone and Borsellino. (by Elvira Terranova)