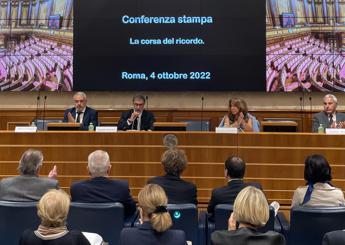 “Sport and culture are fundamental travel companions in our lives and the Race of Remembrance it is a clear commitment to a history left in oblivion for many, too many years. Three hundred and fifty thousand Italians from Istria, Fiume and Dalmatia abandoned the shores of the Upper Adriatic and dispersed throughout Italy, where they were placed in 109 refugee collection centers scattered throughout the peninsula. Today the children of those martyrs, through sport, keep the memory alive ”, thus Claudio Barbaro, President of ASI (Italian Sports and Social Associations, organizing body of the event) and spoke this morning at the presentation conference of the Corsa del Ricordo held in the Senate at the Nassyria Hall. “That of the Corsa del Ricordo, is a project, which has grown over the years to the point of being held in this edition simultaneously in four cities throughout the countryfrom north to south of the peninsula, and be housed in a prestigious hall of Palazzo Madama to underline the now national significance of the running event ”, explains Barbaro.


Great participation of sports and political authorities representing the four cities. The organizers also received greetings from the President of Fratelli d’Italia Giorgia Meloni and the President and CEO of Sport and Health Vito Cozzoli. The race, born in 2014 thanks to the ASI Provincial Committee of Rome and its President Roberto Cipolletti, supported by the national structure of the organization, makes use of the active collaboration of the National Association Venezia Giulia and Dalmatia (present today at the press conference the National Vice-president Donatella Schürzel, who embraced its historical aims, and wanted to support Asi’s efforts, making such an articulated and complex programming possible, giving the way to runners, from all over Italy and from abroad, to participate in an event that, given the objectives it sets, it is much more than a sports competition. The race will take place this year on an unusual date compared to the canonical one linked to the Remembrance Day of February 10, due to the Covid emergency. In 2023 the other cities will be announced that have asked to organize a similar event on the occasion of the tenth anniversary of the race.