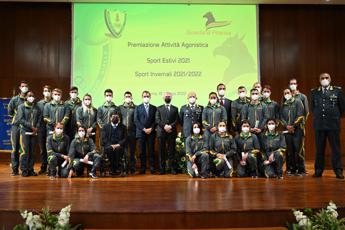 It took place today, in Rome, in the presence of the Minister of Economy and Finance, Daniele Franco, of the General Commander of the Guardia di Finanza, Gen. CA Giuseppe Zafarana, of the President of the Italian Paralympic Committee, Luca Pancalli, of the Secretary General of the Coni, Carlo Mornati, the President of Sport and Health, Vito Cozzoli, the Commander of the Sports Center of the Guardia di Finanza, Gen. B. Flavio Aniello and numerous Presidents of the competent Federations, the Award Ceremony for the athletes of the Fiamme Gialle Sports Groups who have particularly distinguished themselves for the 2021 and winter 2021/2022 competitive activities.

The event opened with the screening of an evocative video celebrating the successes related to the 2021 and winter 2021/2022 season. A brief and exciting excursus of the successes recently delivered to the collective imagination of Italian sportsmen. The highlight of the ceremony was the delivery to the athletes of the patents of the moral rewards by the Minister and the Commander General.

Following the speeches, the General Secretary of Coni, Carlo Mornati, highlighted how much the victories of the athletes of the Fiamme Gialle have contributed to a historic season for Italian sport. “I had the pleasure and the good fortune of experiencing these successes that were the result of meticulous preparation resulting from the programming and synergy between the Fiamme Gialle and Coni”, explained Mornati who also greeted the president of Coni Giovanni Malagò . The President of the CIP, Luca Pancalli, on the other hand, praised the ability of athletes to project themselves into the future and plan long-term goals. “It is always nice to be able to celebrate the successes of our athletes. All the successes of the Olympic and Paralympic athletes during this period have had even more value,” said Pancalli.

The Commander General recalled the feat accomplished by Sofia Goggia and the extraordinary results of Giacomo Bertagnolli at the recent Olipiadi and Paralympics and the brilliant achievements of the other athletes of the Sports Groups champions in life and in sport, an example for all young people. “Real feats arrived at the Olympics and Paralympics. Sofia Goggia was monumental after her injury, to the point of winning a silver medal that earned her a place in history. Just like Giacomo Bertagnolli, another incredible protagonist of the Paralympic expedition. It was a fantastic year, “said the Commander General of the Guardia di Finanza, Giuseppe Zafarana.

To close the speeches, the Minister of Economy and Finance, Daniele Franco who after thanking the Authorities and the guests present, expressed satisfaction for the successes obtained by the athletes of the Fiamme Gialle in their sports disciplines and underlined how sport should to be a vehicle for inclusion and synergy between the various institutions to obtain excellent results and achieve any goal: “The athletes of the Fiamme Gialle, for this very reason, are an example for everyone and a testimony for the whole country. One of the foundations of the Next Generation EU is inclusion and sport is fundamental in this aspect. Ours must be a society open to all. I congratulate everyone, those who won and those who came close “.