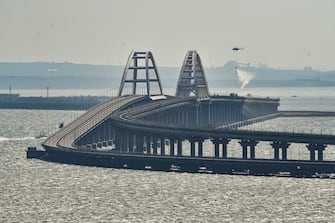 A bomb truck it exploded yesterday on the Kerch bridge, that connects Crimea to Russia. Still to be clarified who is behind the gesture. What at first seemed like a blow landed by Kiev, a few hours later turned into an exchange of accusations between Ukraine and Russia on the actual responsibilities. But what does the infrastructure represent and what role does this attack play in the conflict between Russians and Ukrainians?

The fire, now extinguished, would have been work of the Kiev secret services, according to what emerged initially. But the Ukrainian presidency in the afternoon he suggested that there be a “Russian track”. Advisor to the head of the president’s office, Mikhail Podolyak, considers the explosion “a manifestation of the conflict” between the Russian security forcesin particular “between the FSB on the one hand, and the Ministry of Defense / General Staff of the Russian Federation on the other”

The bridge was inaugurated in 2018. It is 19 kilometers long and is the largest in Europe. It also represents the only direct link between the peninsula and the Russian region of Krasnodar. After the explosion, one of the two carriageways collapsed. Also damaged was the railway above where the flames engulfed a tank train carrying fuel tanks.

THE SPECIAL OF SKY TG24 ON THE WAR

Moscow undoubtedly speaks of “a terrorist attack with a bomb truck “. Putin suffered ordered the formation of a government commission to investigate the incident. According to Moscow, rail traffic has been restored, as has the passage of light vehicles on the road. What happened has a strong symbolic value also because the attack comes the day after Putin’s 70th birthday

The Kerch Bridge after all is an icon for the Russians. Costing around $ 3 billion, it was designed in 2015 after the annexation of Crimea, the peninsula that Khrushchev ceded to Ukraine in 1954 and which Putin took over by sending his troops in 2014. The Russian president inaugurated it in person. in 2018 stating that it was the clearest proof that the peninsula was and would remain Federation territory

Before the war with Ukraine the bridge was the only way to reach the Crimea from Russia. After February 24, the day of the Russian invasion, it became the crucial logistic line for the armed forces of Moscow. In fact, fuel supplies, ammunition and weapons transit from the bridge to be subsequently distributed throughout the Kherson front.

The bridge therefore has a large one value also in terms of military strategy. It reduces the time for supplies compared to ferries which – especially in winter – are faced with prohibitive conditions due to winds and raging sea

Putinreports the Taxsigned a decree for Rstrengthen the safety measures on the deck of Kerch and on infrastructure which supply electricity and gas to the Crimea. The role of strengthening protective measures was given to the Federal Security Service of the Russian Federation (FSB)

Lavrov: “Kiev creates risks for the use of weapons of mass destruction”