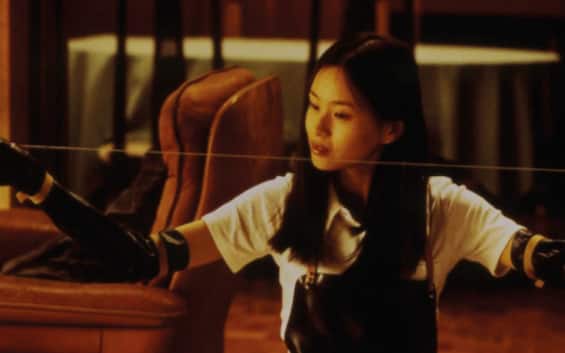 “I wanted to make a film that viewers would regret seeing,” said the director, who conceived the film as a twisted and mocking love story. To those who ask him if the vision dthe auditions could be dangerous for the more impressionable viewers, Takashi Miike replies: “My film is dangerous, but less and less than a human being can become”. First released in 1999, auditions became the phenomenon of the Rotterdam festival that year, giving it unprecedented international visibility. And now thanks to Wanted Cinema, the film is back in cinemas in a restored version from Monday 23rd to Wednesday 25th January.

HERE THE LIST OF THE HALLS WHERE THE FILM IS SCREENED

auditionsthe plot of the movie

Shigeharu Aoyama, a film producer who has been widowed for seven years, takes his colleague Yoshikawa’s advice to arrange an audition for an imaginary film to find a new wife. He thinks he’s found her when he runs into Asami Yamasaki, a sweet and intelligent but mysterious young woman. The man immediately falls in love with her and, without revealing her subterfuge, begins a relationship with the girl. During a romantic weekend by the sea, Asami goes missing. The producer goes in search of her in love with her, discovering a distressing secret: she is involved in the disappearance and murder of several people. When he begins to understand Asami’s true personality, she reappears and everything turns into a nightmare for him…

After a long apprenticeship in television Takashi Miike established himself starting in 1991 as a director of yakuza movies, a Japanese film genre centered on the Japanese criminal organization of the same name, with a long series of films made at a very fast pace (even 5 or 6 per year) for the lucrative home video market, or V-Cinema, considered B or Z series. Between 1999 and 2000, Miike made 10 films. He was already a commercial phenomenon in Japanese cinema when novice producer Toyoyuki Yokohama offered him the script for Audition advising him to ride the wave of horror films launched by Hideo Nakata’s The Ring (1998). Arrived at his 35th film (in 9 years) Miike meets horror and gets international awards and success for the first time. His aggressiveness and taste for violence have made him compared to Kinji Fukasaku, the director of The grave of honourand and Battle Royale and gory scenes were already present in his previous cinema. But nothing in his already substantial filmography truly resembles a horror movie before Audition.

Asami, the sadistic protagonist of auditions

Miike saw the opportunity to portray a female character with sadistic impulses that rival those of tattooed gangsters. Audition is the adaptation of a novel by Ryu Murakami, made famous by Coin Locker Babies (1980), a writer who has done a lot for the discovery of new Japanese literature and who shouldn’t be confused with the other Murakami, Haruki, whose imagination she is much less excited. The screenplay is by Daisuke Tengan, Shohei Imamura’s eldest son. And it was precisely at the school founded by the great master of Japanese cinema that the young Takashi was trained to then start as assistant director in films such as The Pimp (1987) and Black Rain (1989). There is no doubt that Miike’s very physical cinema and its absence of taboos have a link with that of the author of My Vengeance (1979). This double filiation, natural and cinematographic, will give life to a new insect-woman: Asami, the tarantula whose sting is a syringe that injects her victims with a paralyzing venom.

Asami, as in the original work, was meant to be as seductive as she was terrifying. Based on Murakami’s confession, the novel is a love letter to an actress he met during the auditions for his film Tokyo Decadence. According to Miike, this would be a way to tell him that he still loves her and that she suffers from it. Miike therefore conceived the film as a “twisted” love story. The screenplay is very faithful to the novel, even if it differs for two reasons. One is narrative, as it focuses on producer Aoyama’s drifting mind that collapses after being bewitched by Asami. The film revisits the episodes of the relationship between the two protagonists in an altered way, as in the scene of the date in a bar. “The scenes are the same, but the dialogues are a little different,” explains Miike. The glasses are of another color. This is to confuse the viewer. The sets mix, images of his deceased wife return, and he enters Asami’s past. He observes the sexual abuse suffered at the hands of his disabled stepfather. These scenes are ambiguous in nature because at no point did Asami confide in Aoyama. Still, they speak the truth about the character. The other discrepancy is an addition, which proves to be decisive: one of those horror scenes that will make Audition a true planetary legend. In the novel, Asami’s ex-lover, music producer Shibata, dies of cardiac arrest after cutting off both of her feet. His fate in the film is much more traumatic. It is he that the young woman keeps in a bag after having mutilated him, feeding him with her vomit. In his delirium, Aoyama witnesses this scene realizing that he will be Asami’s next pet. To punish men, accustomed to lie to her and leave her, the spider-woman finds a solution to always keep them with her.