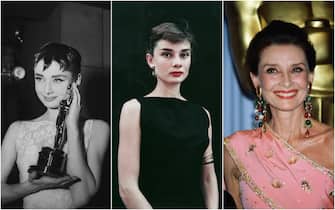 A timeless icon, an actress full of talent, charm and elegance. Thirty years ago, on January 20, 1993, Audrey Hepburn died. Born in Belgium on May 4, 1929, raised between the UK and the Netherlands, became a Hollywood star and Unicef ​​ambassador, she died at the age of 63 in Switzerland. Between theater and cinema you have worked with the most important directors and colleagues. She is one of the 17 EGOT artists: that is, she managed to make the “grand slam” of the show by winning Emmys, Grammys, Oscars and Tonys. Many of her roles entered history. To remember her, here are 14 of her best films

WATCH THE VIDEO: Audrey Hepburn, the successes of the actress

Roman holidays (1953). It is Audrey Hepburn’s first major film in Hollywood and gives her the Oscar for best actress, as well as world fame. Directed by William Wyler, she stars opposite Gregory Peck. Hepburn plays Anna, a princess of an unspecified nation who visits several capitals during a diplomatic trip. The last stop is Rome. To disconnect from the busy schedule, one evening she decides to take some freedom and goes out to discover the city. She meets Joe Bradley, a US reporter who will find herself choosing between career and feelings

Sabrina (1954). A year later Hepburn is the protagonist, with Humphrey Bogart and William Holden, of this film by Billy Wilder. She plays the chauffeur’s daughter of a wealthy Long Island family. She has always been in love with her second son David, who does not consider her. Years later, when Sabrina returns from Paris, David notices her. However, she discovers that she has feelings for her eldest son Linus. To dress her is the French designer Givenchy: a partnership was born that lasted her whole life. The film wins the Oscar for costumes, for Hepburn nomination for best actress

Audrey Hepburn, the most iconic phrases of the actress

War and peace (1956). In this film directed by King Vidor, based on the novel by Leo Tolstoy, Hepburn stars alongside her new husband Mel Ferrer. She plays the role of Natasha Rostova: during Napoleon’s Russian campaign, the young woman becomes engaged to the widowed officer Bolkonsky. When she becomes infatuated with someone else, he loosens the bond. The war makes them lose, until they find themselves in Moscow but still can’t be together. Hepburn gets a Golden Globe nomination for Best Actress in a Drama

From Audrey Hepburn to Marilyn Monroe, yesterday’s stars according to today’s standards. PHOTO

Cinderella in Paris (1957). This musical film by Stanley Donen is one of Audrey Hepburn’s favorites: after years spent studying dance, in fact, the actress has the opportunity to dance with Fred Astaire. The star plays Jo Stockton, a librarian who is accidentally discovered by a modeling agency looking for new faces. Photographer Dick Avery (Fred Astaire) and magazine editor Maggie Prescott (Kay Thompson) convince her to leave New York for Paris. But in France, more than fashion, Jo is interested in meeting the philosopher Emile Flostre

Arianna (1957). In the same year Audrey Hepburn is in theaters with this film directed by Billy Wilder. The cast also includes Gary Cooper and Maurice Chevalier. She plays the daughter of a private detective: she discovers that a client of her father wants to kill her wife’s lover, a rich and famous womanizer. To try to help the billionaire, even Arianna will end up succumbing to the man’s charm. For this role Hepburn receives another nomination for Best Actress in a Comedy or Musical

The story of a nun (1959). For this film, directed by Fred Zinnemann, Hepburn gets her third Oscar nomination for best actress and several awards (including the David di Donatello for best foreign actress). She faces one of her toughest performances of hers, but one that is considered among her best. She is Gabrielle, the young daughter of a well-known doctor who leaves her boyfriend and her house because she decides to become a nun. With the name of Sister Lucia she leaves for the Congo to assist the sick and needy, but she can’t stand the strict rules of her order

Breakfast at Tiffany’s (1961). It is one of Audrey Hepburn’s most famous and iconic films, earning her another Academy Award nomination for Best Actress and another David di Donatello for Best Foreign Actress. The film, directed by Blake Edwards, is based on the novel by Truman Capote. The protagonist is Holly Golightly, who lives in New York and dreams of marrying a billionaire. In the morning she loves to have breakfast in front of the windows of Tiffany, the legendary jeweler. In her own building lives Paul Varjak, an aspiring writer who falls in love with her

Breakfast at Tiffany’s with Audrey Hepburn, photos of the look of the actress

Charade (1963). Great success also for this film directed by Stanley Donen, which earned Hepburn other awards, including the third Bafta. Cary Grant plays with her. The actress plays a young woman who, returning from a vacation in the mountains, discovers that the man she was divorcing has been killed. Her husband has hidden a large sum and a series of men are chasing her in search of her money. To help her comes a charming and enigmatic gentleman

My Fair Lady (1964). Audrey Hepburn also stars in this musical film by George Cukor, opposite Rex Harrison. She plays her flower girl Eliza Doolittle: a British linguist bets with a friend that he will be able to transform her into a woman of high society within six months. Although she was dubbed in almost all the songs, the film is a success and Hepburn gets a new Golden Globe nomination and the third David di Donatello

How to steal a million dollars and live happily (1966). In this film Audrey Hepburn is still directed by William Wyler and she plays opposite Peter O’Toole and Eli Wallach. It is a funny crime comedy. The actress plays the daughter of an esteemed Paris art collector who is actually a forger. To avoid trouble for her father, the girl decides to steal a statue from the museum. To help her a man who she believes is a thief but who will turn out to be a detective

Two for the road (1967). Yet another Golden Globe nomination for Best Actress in a Musical or Comedy for Audrey Hepburn. The film is directed by Stanley Donen and also stars Albert Finney. The plot revolves around Joanna and Mark and their ten years of marriage: the two got married after meeting during a hitchhiking trip through Europe and, after the initial love, the betrayals, the tensions, the birth of a daughter, they decide to divorce

The eyes of the night (1967). Audrey Hepburn also takes part in this thriller directed by Terence Young: her interpretation earned her another Oscar nomination for best actress. She plays the role of a courageous blind woman tormented by three criminals who want to recover a doll filled with cocaine

…and everyone laughed (1981). This is the last major role in Audrey Hepburn’s film career. In this film by Peter Bogdanovich, the actress plays opposite Ben Gazzara. The nice comedy tells of a group of New York detectives who specialize in following the wives of jealous husbands. Sometimes, however, the detectives do not limit themselves to their work but start romances with the stalked women

Always – Forever (1989). Audrey Hepburn’s last cinematic appearance is in this film by Steven Spielberg. She plays a small part: that of Hap, a spirit dressed in white who reveals to a recently deceased man what awaits him. Since retiring from the big screen, she has been awarded several special awards to celebrate her cinematic merits: such as the Jean Hersholt Humanitarian Award, a Golden Globe and a Bafta for Lifetime Achievement

Audrey Hepburn, the diva who enchanted the world. PHOTO