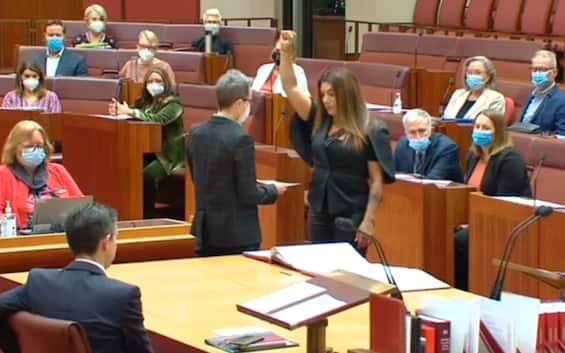 Queen Elizabeth II of England is a “colonizer”. Thus the Aboriginal senator Lidia Thorpe defined the sovereign that she is also the head of state of Australia. The incident happened last Monday during the swearing-in ceremony in Parliament. Thorpe, from the Green Party, approached the bench with her right fist raised and, instead of reading the canonical formula, said: “I, Lidia Thorpe, solemnly and heartily swear that I will be faithful and promise total loyalty to Her Majesty Queen Elizabeth II, the colonizer “.

Senator Lidia Thorpe belongs to the Australian Aboriginal peoples and her words caused quite a stir in the House. Senate President Sue Lines recalled Thorpe and invited her to repeat the oath, reciting it correctly. The senator, still with her right fist raised and in a reluctant tone, recited the formula without variation. After the ceremony, Lidia Thorpe wrote on her Twitter profile “Sovereignity never ceded”: it is a motto used by Aboriginal peoples to indicate that their sovereignty over Australian lands has never been ceded to the British.

For more than a century, between the late 1700s and 1800s, Australia was a colony of the British Empire. Aboriginal peoples in this period were subdued, killed or forcibly removed from their lands. To this day Australia is still part of the Commonwealth, despite gaining independence from the British in 1901. Indigenous leaders have struggled for years to gain recognition of the injustices suffered by their peoples. Prime Minister Anthony Albanese is looking to make changes to the constitution to recognize indigenous minorities and ask governments to consult Aborigines on decisions that impact their lives. Meanwhile, Buckingham Palace spokespersons have not yet released any statement on the incident.