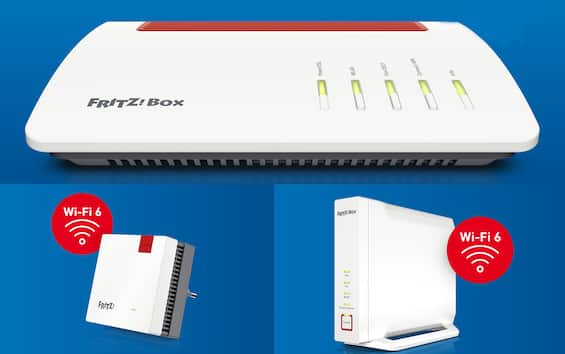 AVM, a Berlin company specializing in connectivity and broadband devices, has recently presented two new router models suitable, in our opinion, for professionals, for those who are not satisfied with traditional modems and routers and need, for work, gaming or entertainment, high performance and to be able to configure virtually all the features of your home network. We are talking about the Fritz! Box 7590 AX Edition International modem router and the Fritz! Box 4060 router. Together with the two new products we also tested the Fritz! Repeater 1200 AX extender. After a few months of testing, here’s how it went.

It was certainly one of the company’s most anticipated novelties of the year: the Fritz! Box 7590 AX Edition International is the evolution of the Fritz! Box 7590 we talked about a couple of years ago, until now the modem-router of the most famous and appreciated German company. Its main feature is that it can act both as a router, and therefore be connected to the operator’s modem, managing the entire home network, or directly from a modem connected to the broadband or the ONT of the optical fiber (making use of the possibilities offered from the free modem regulations). Fritz! Box 7590 AX is compatible with the new ultra-fast Wi-Fi6 standard (wireless AX, in fact) which offers premium performance particularly in the field of streaming, gaming, videoconferencing and cloud applications, reducing latency times and always guaranteeing fast speeds within the home network. The Fritz! Box 7590 AX is capable of transmitting up to 2,400 Mbit / s on the 5 GHz network and up to 1,200 on the 2.4 GHz network and, like its predecessor, also integrates a telephone switchboard to which up to two analog telephones can be connected and up to six DECT cordless phones (provided this possibility is provided by the telephone operator). There is also a media server and integrated NAS functions, which allow you to share documents, films and music within your local network (with protected access even from the outside).

In our test, which lasted over two months, we found the configuration and connection to the internet very simple (also thanks to the well-made guides on the AVM website). The configuration of all the parameters is very simple: the system, among other things, if you are not an expert, it configures everything automatically while the most demanding can easily set, via app or web interface, all the parameters of the local network. The software is always very fast and intuitive, which among other things allows the complete management of the profile of each connected device, the parental control and energy saving. The modem has two USB 3.0 ports for connecting memory media, network printers or mobile network keys, four ultra-fast Gigabit LAN ports, one Gigabit WAN port, and two analog phone ports. The list price is not low (€ 319.99), although in line with the many functions offered.

Another new model we tested is the Fritz! Box 4060: it is a tri-band wireless router compatible with the Wi-Fi 6 standard, ideal to be used “in cascade” with the modem provided by the operator (DSL, optical fiber , cable) to create high-performance local networks. Unlike the 7590 AX, the router has a vertical configuration and is also ideal for those with limited space at home. The 4060 is equipped with three radio units and 12 antennas that allow for data transmission speeds of up to 6 GBit / s. The operating system is the same as the top of the range 7590 AX and integrates, as we have seen, the functions of parental control, network management, telephony, NAS. Present three LAN ports (with transmission speed up to 1 Gbit / s) and a USB 3.0 drive for connecting storage media. Also in this case we confirm the simplicity of configuration that allows you to configure a new home network in a few minutes. Not low price: the list costs 259.99 euros.

Finally, here is the Fritz! Repeater 1200 AX: it is a wireless repeater designed to enhance and extend the wireless network in a simple way thanks to Mesh support. Particularly useful for those with very large or multi-storey homes, the Fritz! Repeater complies with the Wi-Fi 6 standard and thanks to the support of two radio units it can reach transfer speeds of up to 3,000 MBit / s. The product is light and compact and to use it just plug it into a power socket halfway between the area covered by the modem and the one where there is no coverage. There are several intelligent technologies such as Cross Band Repeating and Band Steering, able together with the advanced function of automatic radio channel choice to ensure optimal transmission of the Wi-Fi signal. There is also a Gigabit LAN port on the device. List price 89.99 euros.