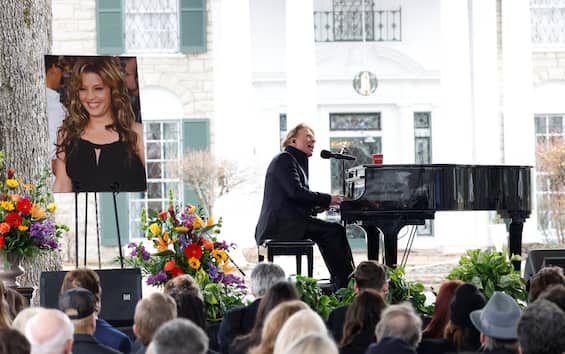 Axl Rose sang and played piano on the song November Rain on a very sad occasion: the funeral of Lisa Marie Presley, the late daughter of Elvis who recently passed away.

The video of the moving eulogy of the Guns N’ Roses frontman is making the rounds on the net.
“I never in a million years would have imagined singing here… and especially under these circumstances,” said Axl Rose.
Before starting his performance, the musician spoke movingly about the deceased, whose death took place on January 12th.

The funeral in which the artist took part took place at the Graceland mansion in Memphis, Tennessee. The memorial service was held on the front lawn of the Graceland Mansion. The funeral can be reviewed on the Graceland website, which invites fans to leave keepsakes and tributes in an online guestbook.

After a speech honoring Elvis and Priscilla’s daughter, Axl Rose performed a solo piano version of the classic November Rain by Guns N’ Roses, song released in 1991.
Attending the heartwarming moment were a few of Lisa Marie Presley’s loved ones, including her mother Priscilla, Smashing Pumpkins frontman Billy Corgan, Alanis Morissette and the Duchess of York, Sarah Ferguson.

You can watch Axl Rose sing and play the piano November Rain by Guns N ‘Roses on this sad occasion in the video that you find at the bottom of this article.

The words of Axl Rose

“I knew if I was invited I would have to come to this ceremony,” said Axl Rose in a voice choking with emotion. “I hadn’t planned to speak and when I was pushed I really didn’t know what to say.”
The Guns singer went on to say, “I feel like I have to send her a message […] saying I’m here to tell you how wonderful everyone is,” she continued. “I never in a million years would have imagined singing here and especially under these circumstances. This is truly devastating and I’m sure heartbreaking for everyone here and everyone affected.”

During the funeral, Alanis Morissette and Billy Corgan also performed.

Corgan performed the Smashing Pumpkins song instead To Sheilataken from the band’s 1998 album adore.