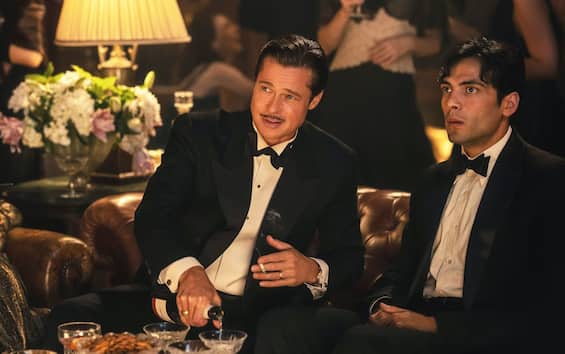 Exaggerated, explosive. A riot of colors, music and excesses.

A film that deliberately Damien Chazelle, Oscar-winning director for La La Land, he wanted to make it as concrete and disturbing as possible, because Hollywood in the ’20s was like that. After a lukewarm reception in the United States, where perhaps not sweetening the past has not been forgiven, arrives now in Italy on January 19th Babylon, the film that tells the story of the transition from silent to sound in a booming film industry where drugs and parties seemed to matter more than anything else. In the cast Margot Robbie and Brad Pitt, but also Diego Calva and Li Jun Li.

From the unexpected kiss in the script that Margot Robbie managed to snatch from Brad Pitt, as she herself said, to Pitt himself who recites a few lines in Italian: the performance of the two actors, according to Chazelle himself, was memorable. Her homage, not too veiled, to Fellini, her passion for Visconti, her joy at being in Rome for the first time.

Damien Chazelle also held a Masterclass together with Paolo Sorrentino at Cinecittà. Because cinema, as he himself says, has always been part of his life and it couldn’t be otherwise. Here’s what he told us.

What was the vision and idea that followed in making this film?

When I started thinking about the film I was fascinated by the idea of ​​telling the evolution of this city, Los Angeles, in the middle of the desert, where you had the feeling that nothing was happening and where there were only a handful of farms, cows and trees of orange, in the midst of expanses of emptiness.

Here I wanted to show how within a few years, 20 or 30, it had instead transformed into one of the largest cities in the world, creating one of the most profitable industries in the United States and in the whole world. From a visual point of view I wanted to try to explain how this economic and creative explosion had started and for this the film itself had to look exaggerated, explosive, disruptive. I wanted the audience to feel the energy and madness that I think was necessary in the process of evolution of Hollywood that has been so rapid and in some ways monstrous.

How important are “dreams” in your life and in the films you make?

The dream, in my films and in my life, is fundamental. I think I’ve started dreaming since I can remember, that is always. But there are various dimensions of dreams: when you use this word you often think of light and something positive but in this film in particular I wanted to look at the darkest part of dreams and how they can turn into nightmares, maybe even existing together.

In the film we discover the Hollywood of the past. We know the Hollywood of the present so I ask you what does Hollywood predict there will be in the future?
It’s hard to predict the future of Hollywood. What I have learned from history is that everything is constantly evolving but at the same time history teaches us that fundamental things never change. When we were shooting scenes on set of people doing the same thing on 1920s sets, I was sometimes amazed at how different things were today than they were back then, because there were no rules, there was just freedom and people actually could die. while he was spinning.

At the same time, however, some things left me speechless because I was seeing dynamics that are repeated even now. When with today’s crew we filmed actors who were shooting scenes on the sets of the past, well, I reflected on the fact that then as now we all do the same thing, that is, turning on the camera in front of an actor or something and trying to express emotions through pictures. Well, in these years this aspect has never changed and I find that there is an inherent beauty in all of this. But if I think of Hollywood as an industry that makes money, then yes, of course, this industry continues and will continue to change.

How were Margot Robbie and Brad Pitt on set?

It was my first time working with Margot (Robbie) and I assure you that both me and the rest of the crew were blown away every day on set because she is a force of nature and you can’t stop looking at her. I think this is the most intense role I’ve ever faced and Margot knew the only way to face it was not to hold back, jump into it! This obviously required a lot of courage and energy and it was really exciting to watch her at work. The role Brad plays is different, because when we meet his character he’s already at the top of his career and exudes grace and calmness. Then in the course of the film things change for him and we discover his vulnerability and melancholy. I thought these were unusual aspects faced by him, because we are all used to think of him as a bright star. Here in Babylon instead I think he was able to show a new aspect of himself, more tender, fragile and vulnerable under the invincible actor and I think Brad was very good.

What does cinema represent for you and what role does it play in your life?

Cinema has been one of my greatest loves since I was a child. It’s hard to explain where this love really comes from. Cinema allows me to escape into unexplored worlds but at the same time often helps me to better understand my inner world and my emotions. There is an almost chemical relationship between me and the cinema because it enhances my senses, my emotions, I don’t know… it’s like a drug and I can’t do without it! I think even if I wanted to do something else and not watch movies anymore…well, I’m sure I couldn’t. I need cinema!.