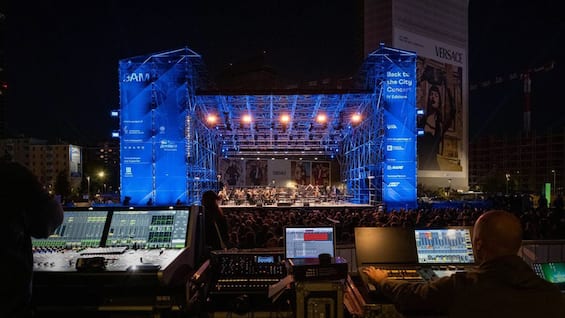 Record of attendance with 6500 admissions for Back to the City Concert, the great free concert given to the city by the Riccardo Catella Foundation, an unmissable moment of the cultural program of BAM – Biblioteca degli Alberi Milano, conceived and directed by Francesca Colombo, General Director of Cultural BAM – Riccardo Catella Foundation, which welcomes the Milanese every year on the return of the summer holidays.

“The moment tonight testifies to the virtuous alliance between public and private and the relevance of a project that invests in the participation of citizens. We will continue to invest in Nature and Culture to help bring wellness and beauty to the city: a confirmation of the Riccardo Catella Foundation’s commitment to promoting sustainable development in the area ” declares Kelly Russell Catella, General Manager of the Riccardo Catella Foundation

“Exciting and getting closer: these are the elements that make the concert that the Riccardo Catella Foundation organizes every year at BAM an unmissable event. The large audience participation in this evening effectively testifies to the deep and special bond between Milan and music, a natural connection that meets and shares “, commented the Mayor of Milan Giuseppe Sala.

Precisely in the European year of young people the protagonists of the concert are not by chance the Soloists of the Academy of Perfection for Opera Singers of the Teatro alla Scala and the Orchestra of the Teatro alla Scala Academy, under the direction of Maestro Pietro Mianiti, with a varied program that saw the performance for the present public of the most famous pages of great composers such as Georges Bizet, Gaetano Donizetti, Pietro Mascagni, Giacomo Puccini, Gioachino Rossini, Giuseppe Verdi. The young artists have interpreted famous arias from Carmen, Lucia di Lammermoor, Il Trovatore, La bohème, A masked ball and La Traviata, and symphonies from Nabucco, Cavalleria Rusticana and Guglielmo Tell, up to the splendid quartet “Goodbye sweet wake up”Which closes the third act of La bohème.

“We shared a strong human experience thanks to listening to this music, tonight we were connected by strong emotions. I strongly believe in the beauty and emotional strength of culture: this is the spirit of the artistic program that we create among the trees of BAM” – says the creator of this event, Francesca Colombo “The BAM concert in nature is an increasingly inclusive and participatory moment for the city. The citizens, over 6,000, the Institutions and the many personalities from the world of culture, the social world and the world of economy have demonstrated this tonight “

More than 3000 people attended the concert sitting on the lawn in front of the stage that hosted the 75 artists of the Accademia del Teatro alla Scala and thanks to a powerful audio system, the approximately 3500 people present throughout the Library of the Trees were able to listen to the program of over an hour that at the end also gave two encores requested loudly by the entire public.

Back to the City Concert is one of the main events of the BAM cultural program, which offers citizens over 200 BAMoments per year, always free and open to all citizens.

An open-air theater where performance, music, art, cinema, poetry and science find space among the trees, always in the name of the Nature-Culture combination.

Thanks to an innovative public-private partnership with the Municipality of Milan and COIMA, the Riccardo Catella Foundation, with the BAM – Biblioteca degli Alberi Milano project, becomes responsible for the management, safety, maintenance and cultural program of the public park. The contents of the program are developed on the 17 UN Sustainable Development Goals, divided into four areas: #openairculture, #nature, #wellness, #education.

Back to the City Concert was created with the contribution of Volvo Car Italia and Assiteca, Park Ambassador of BAM, COIMA, Park Developer & Supporter, Mapei as Partner, Sky supporter and ATM as Technical Partner. The concert was included in the MilanoèViva schedule of the Municipality of Milan and under the patronage of the Lombardy Region.