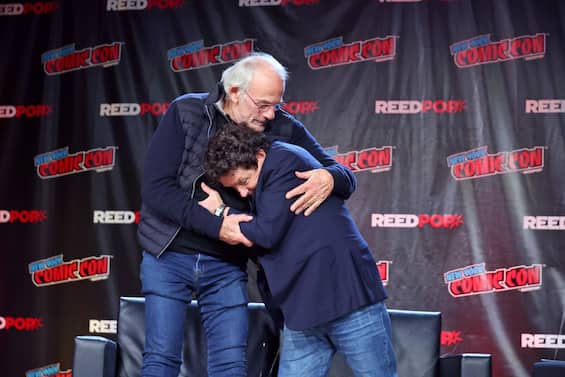 It took them a while to find each other, the time needed to shoot two unforgettable films, but then when the pieces finally fell into place, their friendship became indissoluble. Michael J. Fox he didn’t want to forget Christopher Lloyd not even from the stage of the Sundance Film Festival, from where he celebrated his colleague and lifelong companion.

Fox has dedicated a moving tribute to the interpreter of Emmett L. “Doc” Brown of the trilogy of Back to the Future: “He’s not just a madman. And it took two movies to actually become friends but in Back to the Future III we were inseparable”, said the actor who is at the most important festival of independent cinema to present Still: a Michael J.Fox Movie. As you can guess from the title, this is a documentary focused on the history of Fox. A journey in which archival footage alternates with reconstructions to return the portrait of a star who hides nothing of her past, speaking openly not only of her career but also of her vices and above all of her battle now more than thirty years with Parkinson’s. “It’s a film about a wild life, an incredible run up and down, an 80s Hollywood star and what happened when life threw him a curve ball,” said the star documentary filmmaker Davis Guggenheim. Fox was diagnosed with a form of juvenile Parkinson’s back in 1991, when he was a fresh thirty-year-old with a bright future ahead of him and already capable of stringing together successes such as Willingness to win And The thousand lights of New York. Right in the middle of this extraordinary professional career, the discovery of the disease arrived for the interpreter of Marty McFly, which he noticed right on the set, during the filming of Doc Hollywood – Career Doctor. Finally, after a forced break of several years from the set and after a long battle with Parkinson’s (also fought through his foundation), today Michael J. Fox is still here and somehow managed to cross the decades without having to leave the whole screen. A troubled but full of satisfaction love story with cinema that perhaps could not have even begun if it hadn’t been for an iconic role on that set where he met someone special.

A friendship that was born slowly

What would the trilogy of Back to the Future with Eric Stoltz as Marty McFly? The question has haunted fans of the saga for years and represents one of the greatest “what ifs” in the history of cinema. Self Robert Zemeckis had he not decided in the running to replace Stoltz with Michael J. Fox perhaps we would have had another film and, probably, also the Canadian-born actor would not have become a star. Above all, one might say in the light of the statements made at Sundance, Fox would not have even crossed his path with a person destined to remain his friend forever: Christopher Lloyd. The link between the two protagonists of the eighties cult film had already appeared clear to everyone in the recent reunion, where they exchanged a very tender hug. This time, however, we discovered directly from Fox that it was a slow rapprochement between him and Lloyd or at least certainly not an immediate love at first sight: “It took a few films to get to know him. On the set of Back to the Future III we bonded in a different way than the others. I realized how much she loved acting. I didn’t understand it before.” Fundamental to sparking the spark between the two actors was the passion for their work, with the alter-ego of Doc Brown who represented in a certain sense almost a mentor for his friend. “He can tell you about the value of story in a movie in two seconds and you know it right away. We regular actors have to think about it for hours on end to find that information. Chris is brilliant at that. His love of movies and the craft of the actor. He’s not just a madman, he’s also an artist,” said Fox recalling the times of the long chats together about Shakespeare and the King Lear. Today almost 38 years after the release of the first Back to the Future the interpreters of Marty McFly and Doc Brown seem united more than ever and it’s nice to think that, even in a cynical and difficult world like Hollywood, there is room for such true and sincere friendships. No one today, above all Michael J. Fox and Christopher Lloyd, would ever dream of taking a Delorean and changing something in the history of a cult film that meant a lot, even for the protagonists themselves.