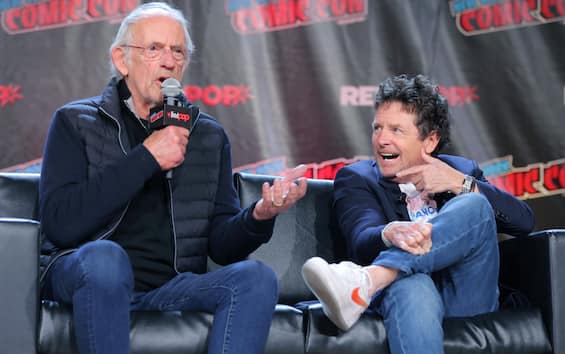 Fans of Back to the Future immediately put their hand on the handkerchief because the reunion between Christopher Lloyd and Michael J. Fox at Comic Con in New York will not leave a chance even for the driest hearts: the tear of emotion is necessary, indeed it is inevitable. We are ready to bet on it.

The two actors met, making an appointment at the New York event to excite everyone with a highly anticipated reunion of the cult film. Christopher Lloyd and Michael J. Fox, 83 and 61 (and respectively Dr Emmet Brown and Marty McFly, though it goes without saying) have remembered the old days, almost forty years after the first film (released in 1985 and directed by Robert Zemeckis).

Lloyd and Fox met at Javit’s Center in New York (where the Comic Con festival took place from Thursday 6 October to Sunday 9 October).

They talked about the saga that consecrated them to living legends of the big screen, taking the opportunity to reveal some tasty anecdote that we did not yet know, happened on the set between takes or even well before (like when Michael’s mother J. Fox begged him not to take the part).

Impossible not to start crying right from the musical theme of Back to the Future, the orchestral music composed by the legendary Alan Silvestri that we listen to before the protagonists leave the stage. The first to enter is Michael J. Fox, followed shortly after by Lloyd. When the two spontaneously embrace it is truly something devastating on an emotional level, seeing is believing (find the full video at the bottom of this article).

This reunion comes on the heels of the stage musical based on the original film, the show currently running in London. The intention is to have it also hit Broadway next year.

After praising the project, Fox (who has long battled Parkinson’s disease) shared with the audience why it was so important for him to show up in person at NYCC: “Guys, you have given me your whole life.” Fox said, before adding that he wouldn’t change his diagnosis if given the chance. “The best thing that happened in my life was this. Parkinson’s is a gift. I’ve told people it’s a gift and they say, ‘You’re crazy.’ I say, ‘Yes, but it’s the gift I keep getting.’ But it’s a gift and I wouldn’t change it for anything … It’s not about what I have, it’s about what I’ve been given. “

Before concluding the panel, the two were asked to leave some pearls of wisdom to the public. In the style of Doc Brown DOC (pass us the pun between Doc and DOC in the sense of “controlled origin”) Lloyd made a joke from Back to the future part III, telling the audience, “Your future is what you make of it, so make it good!”

For his part, Fox shared a quote from his favorite movie, Doctor Strangelove by Stanley Kubrick: “You can’t fight here, this is the war room.” And he told the throng of excited fans standing in front of him that no matter how crazy things get, just “catch your breath, go on and on”.

At the bottom of this article you can watch the entire panel of Comic Con 2022 in New York entitled the reunion between Michael J. Fox and Christopher Lloyd.

Michael J. Fox announced that his mother is dead

Unfortunately, it was also the occasion to make a very sad announcement: Michael J. Fox revealed that he recently lost his mother.
Phyllis – this is her mom’s name – passed away on September 24 at the age of 92. The actor tried to play down the mourning news by sharing a funny story: his mother absolutely did not agree that his son in the eighties (at only 23 years old) was shooting. Family Ties by day and Back to the Future in the evening, at the same time.

Despite his mother’s grievances, Michael J. Fox eventually decided to follow his instincts. And with all due respect to Ms. Phyllis, Michael did well: choosing him allowed him to make history on the big screen.

“Until today … well until two weeks ago … my mother has always thought that for me to do Back to the Future that was a bad idea. He loved the film but, he was right, I got tired, “admits the actor.

The panel began with a reminder of how Michael J. Fox was called in to replace Eric Stoltz, who was originally cast to play Marty McFly.

A little over a month after filming began, the call came to Michael. Lloyd remembers perfectly when the replacement was announced, because he arrived after a series of night shots dedicated to the moment when Doc Brown finally cracked the code for time travel. “The announcement – at 1am after we had been shooting for six weeks – was that the actor playing Marty would no longer be playing Marty and we would start filming with Michael tomorrow,” Lloyd said. ” I felt I could barely get past the [prime] six weeks and now I should have done it again ?! “

The “instant chemistry” shot between Michael J. Fox and Christopher Loyds on set

In addition to talking about his mother, Michael J. Fox dwelt at length to praise his colleague Christopher Loyds.
“Working with Chris was the best part of this movie,” he said with no ifs and buts. “Because it’s just brilliant,” she added.

Fox called it “a thrill” to work on the film and in particular to have the honor of doing it with Lloyd, adding that every time he got to star in a scene with his colleague, it was a “good day”.

In addition to the photos taken during the event, the video of the couple reuniting was shared on social media (where it is grinding views, comments and likes).

Fox took the stage first, in front of Lloyd who then joined his former co-star. The sweet moment was greeted with a lot of applause from the audience, who couldn’t hold back the excitement of seeing the legendary duo embrace.
Between him and Emmy winner Christopher Loyds, now 83, there was a truly incredible empathy. Both recognized how a real “immediate chemistry” was taken between them on the set, the same one that has appeared even now, on that stage.

“The chemistry was there from the first scene we shot. It was alive and it stayed that way for three films,” added Lloyd. “She never went away (that chemistry), anyway.”

Lloyd took a T-shirt off the set as a memento

Asked about a possible souvenir they’d accidentally brought home, Lloyd revealed that he still has a shirt on. He took her away as a souvenir from the set of the third film in the saga.

Below you can watch the entire panel of Comic Con 2022 in New York titled the reunion between Michael J. Fox and Christopher Lloyd. There will be crying, so get ready.