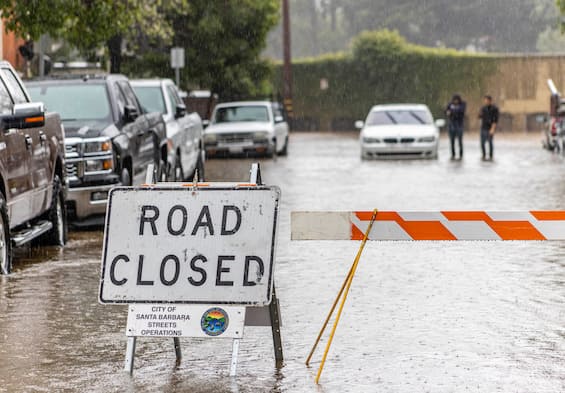 After the weather emergency caused by the heavy snowstorms that brought several US states to their knees in the last week of December, the bad weather is once again striking, but in California, following torrential rains and strong winds that are causing flooding and landslides in various areas, to the point of having already brought the death toll to 14 and caused damage to homes and buildings.

Montecito, a town less than 10km from Santa Barbara, residence of Prince Harry and his wife Meghan, has been evacuated due to the risk that mudslides could overwhelm the houses.

US President Joe Biden declared an emergency yesterday in Golden State in light of the ongoing “severe winter storms, floods and landslides”.

The firefighters have advised all residents to evacuate: “Go away now! This is a rapidly evolving situation. Please pay close attention to the emergency warnings,” their website reads, while the police have set up checkpoints to prevent people from entering the city, where several roads were flooded.

The city of stars

Montecito, although particularly vulnerable to landslides because it is located at the foot of a mountain range that was devastated by a fire five years ago that stripped the hills of the vegetation that normally holds the soil, is a favorite destination for American stars to buy a home .

VIPs with multimillion-dollar estates in the city include Oprah Winfrey, Jennifer Aniston, Gwyneth Paltrow, Katy Perry, Rob Lowe and Larry David or Ellen DeGeneres, the talk show host who posted a video on Twitter of a nearby creek at his house.