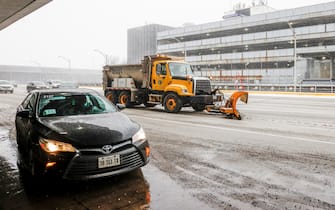 The wave of bad weather that is breaking down in the United States it has so far caused at least nine deaths. It was the one who brought it back Cnnaccording to which i deaths they all happened behind the wheel due of icy roads and snow. Cold weather and high winds continue to slow down transportation across the United States – right now it is BuffaloNew York State, the epicenter of the winter storm with snow and winds up at 127.14 kilometers per hour

60% OF THE POPULATION AT RISK OF FROST – For days now the United States I’m in the grip of frost. Cold, wind, snow and rain paralyze the country from north to south, with 60% of the populationabout 200 million Americans, who risk it to experience the coldest Christmas of the last 40 years

THE DANGERS – The “Bomb Cyclone”, a rapidly intensifying explosive storm has already collapsed the mercury up to 40-50 degrees below zero in the northern states. TO Des Moinesin Iowait’s too cold even for ice skating: the authorities have ordered the closure of the dedicated areas given that “it’s too dangerous to be outdoors for more than 10 or 15 minutes”

THE COLDEST DAY IN HISTORY – In Wyoming and in Coloradowhere is it Denver experienced the second coldest day in its history, within an hour of temperatures they went down 20-30 degreescausing many problems on the roads and electrical infrastructure. One and a half million people I’m practically in the dark and I’m out of heat. A situation that seems destined to worsen in the next few hours

THE EFFECTS IN NEW YORK – TO New York the governor Kathy Hochul has already stated the emergencybanning heavy vehicles from driving along many state roads and closing the stretches of motorway most exposed to the wind. Already covered by snow in recent weeksBuffalo will be the hardest hit city in the state: strong winds and rains are feared to pick up the water level of Lake Erie, with possible flooding. Also alert in the Big Applewhere temperatures between Friday and Saturday are expected to drop to -11 degrees

WATCH THE VIDEO: Historic US storm, Christmas never so cold for 40 years

IN OTHER CITIES – It’s no better at Boston: the sustained winds are creating quite a few inconveniences for transport and for the Americans, who are grappling with Christmas shopping of the last moment. But it’s not alone the northern United States to freeze. From Texas to Florida, thermostats score temperatures not seen in decadesalso complicating the activity on the border with Mexico, where thousands of migrants continue pouring in to chase the American dream

THE PROBLEMS OF FLIGHTS AND PARCELS – Even the airports are suffering hardships: the bad weather is causing a haywire all departure points of the main resorts. Almost 20 thousand flights have been canceled in Thursday and Fridaywith thousands of people seeking alternative transportation to reach home and celebrate Christmas with the family. At risk are also the gifts to put under the tree: FedEx and Ups have warned of possible delays in deliveries expected earlier of 25 Decemberdue to logistical difficulties

THE RESPONSIBILITIES OF CLIMATE CHANGE – Many are wondering right now if the polar cold is fueling the debate on climate changeconsidered by many to be primarily responsible for extreme events such as the ‘bomb cyclone‘ of the last few hours. A particular criticism concerns the changes in the Arctic, which is warming faster than any area on Earth. A link between overheating and extreme cold is yet to be defined, thus leaving it open the debate in the scientific world and beyond