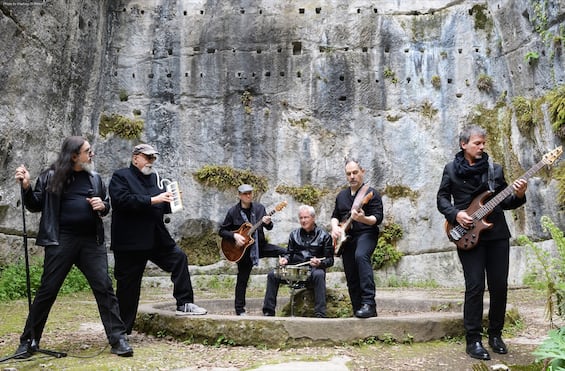 A nine-year wait. Which is finally over and which takes us to a world where love reigns outside of time. The album is Orlando: the forms of love and also celebrates 50 years of history of Mutual aid banka band dragged into legend by his mentor Vittorio Nocenzi. It is a concept album that will develop and spread through a theatrical tour that will debut in Ferrara on October 15th. Other stops will be, in addition to Milan, in Florence, Palermo, Catania, Rome, Bologna Brindisi and Bari.

Vittorio Nocenzi, who wanted to tell his Orlando in first person, demonstrates a mix of seriousness and irony: “I’ve never loved anniversaries celebrated with champagne, Banco likes to celebrate really important moments with concrete work. This is why it immediately seemed wonderful to us the possibility of putting on our 50th anniversary cake not a simple, symbolic candle, but a special candle “. And it is the new unpublished album inspired by and dedicated to Orlando Furioso. Vittorio Nocenzi’s first mission is was, after a pre-listening, transporting us to the heart of the project, and to do so it was necessary to get on the time machine with him and go back to 1971 when, at the Baths of Rome, the Pop Festival of Caracalla, the first free festival aimed at the new musical trends of psychedelic and progressive rock. It was October and the sun was shining in the city: lying on a lawn, a crowd of young people gathers to celebrate their love for music. In the shadow of this spartan and confused stage, the Mutual aid bank. The band initially consisted of Francesco Di Giacomo (vocals), Vittorio Nocenzi (piano, clarinet, vocals) Gianni Nocenzi (piano, clarinet, vocals), Marcello Todaro (guitar), Renato D’angelo (bass), Pierluigi Calderoni (drums ). A few months later, for lovers of Prog hagiography it was May 3, 1972, the Memories Public Disks The Piggy Bankthe historic album that spreads its wings to the now fifty-year career of Mutual aid bank. The first song was entitled In flight and in his verses he evoked Astolfo and his Hippogriff, the two central figures of The Orlando Furioso by Ludovico Ariosto. That iconic song is used as a bridge to the new album. Of course, in these five decades many things have changed: over the years the Bank has undergone various transformations; the most important and painful were the disappearance of two pillars like the singer Francesco di Giacomo and the guitarist Rodolfo Maltese. Overcome doubts and torments, Vittorio Nocenzi decides to do continue the wonderful adventure of Mutual aid bank: “Music – comments Nocenzi – is the only way to keep those who are no longer alive. Through concerts and notes Francesco and Rodolfo will always be remembered with love and happiness. As long as the Banco is there, as long as it remains alive. the ideal of seeking love in a world of injustice and abuse will not really go away “.

Here we are now in the soul of Orlando: the forms of love. The fifteen compositions that make up the disc are born from an idea of Michelangelo Nocenzithe third son of

Vittorio, who reads an unexpected modernity in the Orlando Furioso. The brave and unbeatable nephew of Charlemagne, belonging to the Christian army of the Franks, is struck by love and therefore renounces to help his fighters only to be rejected by the woman for whom he has lost his mind: “It seemed an important opportunity to use the history of Orlando Furioso to respond to the violence and climate crisis of our times – says Nocenzi – and to support the choice of art as a comparison; poetry and music are an offer of pacification and therefore it was an opportunity not to be missed, being an approach consistent with the thought of the Banco del Mutuo Soccorso, which has always been a pacifist and anti-militarist ”. In this reinterpretation of Ariosto’s work, the current Banco chooses a timeless context. We are in an apocalyptic Mediterranean drained of all its sap, an infinite red plain interspersed only with a surviving source of drinking water enclosed by walls and guarded by the feared guardians of the water. It is the only chance of survival for men, women and children who cross the former Mediterranean on foot in pursuit of the dream of going beyond the walls that surround life. Do not miss the Hippogriff, the winged horse that will bring an Orlando to the moon in search of his reason, unable as he is to accept that his beloved Angelica has preferred Medoro to him. The Mutual aid bank manages, through his music and the contribution of the tenor Tony D’Alessio, to show us the magician Atlante who follows the events on the monitors. Orlando: The forms of love in fifteen pieces he goes through all the phases of Orlando’s love in a journey that is not only musical and historical but that becomes, composition after composition, a journey into our deepest self.