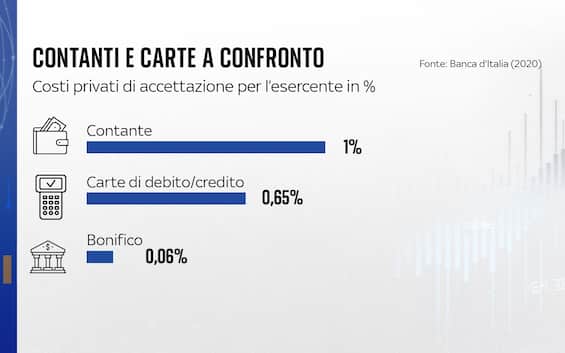 According to the Bank of Italy, it is cheaper for a shopkeeper to receive electronic money than to collect a payment in cash. THE CORNER

Much controversy has raised the proposed raising of the ceiling on cash payments. And it brought back the evergreen discussion about the cost of electronic transactions for merchants.

For example, Confesercenti noted that the boom in payments by credit or debit card “has significant costs for merchants”, which would amount to “about 772 million euros per year, including commissions and the purchase or loan of the device. “. The consumer association of Consumerismo No Profit argues in turn that “the costs of managing cards and ATMs and the commissions on electronic payments enrich the coffers of credit institutions to the detriment of users and merchants”.

Some data from the Bank of Italy show that, however, electronic payments could actually save shopkeepers compared to cash. According to a 2020 survey, receiving an electronic payment would cost the merchant less than cash. Compared to the amount of the sale, on cash the average cost for the shopkeeper is 1 percent, while with a card or smartphone payment this percentage is reduced to 0.65 percent. A portion that among other things is in sharp decline: in 2009 the cost of digital transactions amounted to just over 1 percent.

Cash how much it costs me

On the other hand, cash is not free for the merchant. According to the Bank of Italy “the private cost of cash is the highest due to the higher (variable) costs related to security” such as theft, transport of valuables, insurance as well as the time taken to count the collection to end of the day.

In addition to this, the burden paid by all taxpayers to print the banknotes and finance the anti-counterfeiting checks must also be considered. Adding all these elements together, we arrive at an expense of 7.4 billion euros per year, essentially divided equally between the state and shopkeepers.

Private costs are more expensive for small merchants, where the Pos is more often absent (although it is mandatory from June 2022). For bars, spending exceeds one and a half percent per transaction, as well as for restaurants and hotels. Unlike what happens for large-scale distribution, where costs are reduced by up to 0.6 per cent of the receipt.

The offers on the Pos

Today there are dozens of commercial offers aimed at commercial businesses for the management of electronic payments. The cheapest at the moment on the market – according to the comparison site SignorPOS – offers 0 € monthly fee and a 1 percent commission for each transaction. On the other hand, there are numerous contracts that exempt micro transactions from commissions, up to 10 euros.

Furthermore, the tax credit of 30 percent for the management and purchase costs of the Pos is still in force, for all retailers with a turnover of under 400 thousand euros.