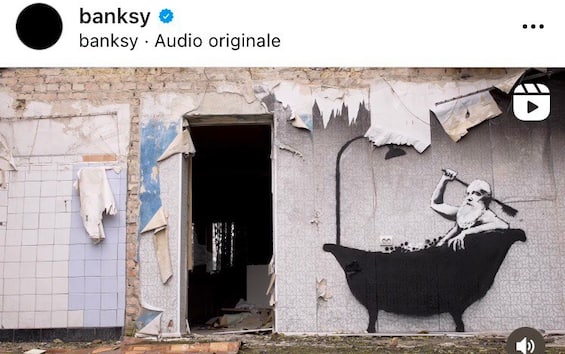 Seven graffiti that Banksy claims to have made with his own hand in Ukraine as an act of solidarity with the victims of Russian military intervention. She does it with a video, posted on her Instagram profile. On the notes of a local folk song (performed by two street musicians) the images of the works painted in various Ukrainian locations follow one another, even among the rubble of sites bombed in recent months. In the video also the voices of some passers-by.

Experts had “branded” them as fakes

Banksy not only attributes the already certified graffiti, an example above all that depicting a Vladimir Putin knocked out with a judo move, but also some drawings deemed false by “experts” and admirers.

In solidarity with the Ukrainian people

There is the old man who takes a bath on the wall of a ruined building and the woman with the gas mask. But also the mockery of a male sexual organ inserted with chalk in place of the ordinance missile on the graffiti of a military vehicle marked by the Z of the forces of the invasion of Moscow. The video ends with the caption: “In solidarity with the Ukrainian people”.