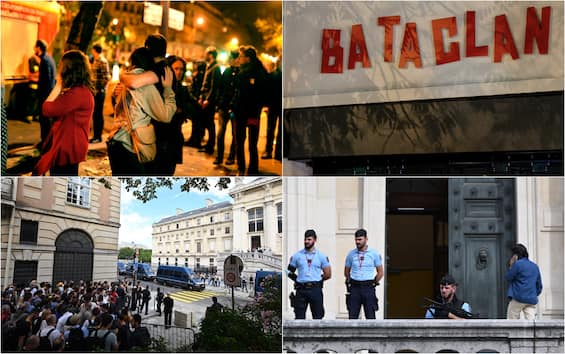 Salah Abdeslam, the only survivor of the jihadist commandos who killed 130 people and injured another 350 in the Paris massacres of November 13, 2015, was sentenced to the most severe sentence in the maxi trial, to life imprisonment without the possibility of reductions or reductions. In jargon, this sentence, the most serious in France so far reserved for only 4 defendants in history, is defined as the “social death penalty”. The 32-year-old was sentenced to the maximum penalty exactly as requested by the prosecution, the national anti-terrorism prosecutor’s office. Conviction, very rare in France, makes any possibility of liberation impossible. The verdict of the Special Court of Assizes established that 19 out of 20 defendants (only 14 present including Abdeslam) were found guilty of voluntary killings. Among the convicts was Mohamed Abrini, the “man with the hat” of the Brussels attacks, who was also supposed to be part of the Paris commandos: 22 years of maximum security were inflicted on him.

There were fourteen defendants “in attendance” in the trial of the attacks of November 13, 2015 between the Stade de France, the Bataclan and the premises in the center of Paris. Two days ago the last hearing was held in the maxi-trial that began in September in the bunker room of the Ile-de-la-Cité. As required by law, each accused was called to speak by President Jean-Louis Périès. Salah Abdeslam is the only surviving member of the terrorist commandos that killed 130 people that night, including the Venetian researcher Valeria Solesin, and injured 350. After being silent for a long time, he started talking. The 32-year-old Frenchman was very ambivalent, oscillating between the arrogance of the beginning of the trial, when he proclaimed himself “fighter of the Islamic State” (Isis) on the first day of the hearing, to when, on the other hand, at the end of the hearings , presented “condolences and apologies to all the victims.” Abdeslam defended himself by assuring that he had given up using his explosive belt in a bar in the 18th arrondissement of Paris, on the slopes of Montmartre, for “humanity”. “I was wrong but I am not a murderer,” Salah Abdeslam said before the judges of the special assize court. “It is true, I made mistakes, but I am not a murderer, I am not a killer, if you convict me of murder, an injustice. ”Abdeslam systematically tried to” minimize the facts, “the prosecution said, and the anti-terrorism prosecutor (PNAT) had asked for a life sentence for him without the possibility of recourse, which was then sentenced.

The stages of the process

The trial was the longest since the postwar period in France, in 148 days of hearings. In total there were twenty defendants in the trial: the 14 who participated plus six others tried in their absence (5 are given for dead). The required sentences ranged from 5 years to life imprisonment. In addition to Abdeslam, for months the most wanted man in Europe before his capture on March 16, 2016 in Molenbeek (Brussels), the same life sentence was requested for his childhood friend, Mohamed Abrini, the so-called “man with hat ”of the attacks in Brussels (March 2016) which recognized involvement in those in Paris as well. “I did not wait for this trial to have remorse or regrets”, said the 41-year-old adding: “I put faces on the victims, I am aware of how unclean what happened is.” Of the fourteen defendants present on Monday at the Palace of Justice, many stood up one by one to express “repentance”, “apologies” and “condolences” to the victims. Three others against whom he was asked for life in prison – Osama Krayem, Sofien Ayari and Mohamed Bakkali – preferred to remain silent.