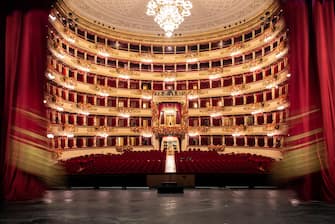 At the start the 2021/2022 Opera Season of the Teatro alla Scala in Milan with Macbeth by Giuseppe Verdi directed by Maestro Riccardo Chailly and directed by Davide Livermore. Lot of the VIPs arrived at the Theater for the occasion. From Dylan Sprouse to Giorgio Armani: here it is the looks

Before the Scala, Davide Livermore: “A dreamlike Macbeth, like the film Inception”. VIDEO

In the picture, Dominique Meyer, Superintendent and Artistic Director of the Teatro alla Scala in Milan

For the first of the Scala, also present the President of the Republic, Sergio Mattarella, accompanied by his daughter Laura. To welcome him with a handshake, the mayor of Milan, Giuseppe Sala, the Lombard governor, Attilio Fontana and the Prefect of Milan, Renato Saccone

In the photo, the stylist Giorgio Armani. Many of the dresses worn this evening bear his signature

In the picture, Manuel Agnelli

The virologist was present at the inauguration Roberto Burioni

This Prima has “a beautiful meaning in a moment when there are many thoughts, La Scala opens up, we are happy”, said the senator for life. Liliana Segre before his entry into the Milanese theater to attend Macbeth