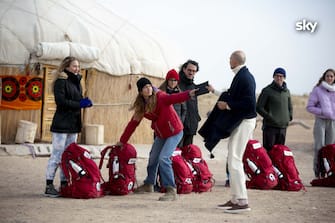 The couples still competing resume their adventure in a new country: Uzbekistan, which has always been the center of trade routes between East and West. Accompanying them in the challenges, Ezio Miccio to whom Costantino della Gherardesca passed the baton due to an injury during filming

The first mission questions the geographic knowledge of all couples. The goal is to walk to a fortress, find some plates with the name of some countries and choose the 5 that border Uzbekistan: sand they will guess, they will be able to set out.

Beijing Express 2022, what happened during the fourth episode. PHOTO

Italy Brazil, Pazzeschi and Fidanzatini, not having guessed right, must return to the top of the fortress. Helena and Nikitasmart as ever, they have a brilliant idea and the other repeating couples take their cue from them.

Journey to Ecuador and Peru, the WeRoad itinerary in the footsteps of the Beijing Express

For the first advantage test of the season, couples must wear 50 cotton shirts, one on top of the other, in ascending order from 1 to 50.

Beijing Express 2022, what happened during the third episode. PHOTO

Only those who manage to wear them faster will win the test.

Beijing Express 2022, what happened during the second episode. PHOTO

The Italy-Brazil duo is in the lead! With their T-shirts on, they must avoid obstacles and go to Enzo Miccio.

Beijing Express 2022, the great debut and the eliminated couple. VIDEO

The obstacle course sees Victoria in the lead together with Bugo, the Jackals eliminated.

Beijing Express 2022, what happened during the first episode. PHOTO

It sounds easy, but it’s not. The couples switch roles and start again wearing the 50 numbered shirts in ascending order.

All the news on Beijing Express 2022

Nikita has some difficulties in overcoming the obstacles, but also on this second occasion, Italy-Brazil arrives first.

Italy-Brazil win the first advantage test! Earning a place in the final standings and leaving a penalty to the Pazzeschi.

Upon assignment of the penalty to the Pazzeschi, the couples complain about the failure of the Italy – Brazil couple to observe the regulation. At this point Enzo decides to deduct a point from the couple who have not respected the rules

Part of the Pazzeschi malus is to wear a typical Uzbek headdress.

For the ultimate test, couples go in search of a stamp with their name to use in making Uzbek bread.

Despite the penalty, the Italy-Brazil duo wins the fifth stage.

There are those who remove a few pebbles from their shoes, and in the meantime the race is getting more and more alive

Second position for the Jackals, third the Pazzeschi and fourth Mum and Daughter.

Among the couples who risk going out we find the Independents and the Scientists, the winning Italy-Brazil couple decides to eliminate the Scientists who despite themselves greet and say goodbye to the race